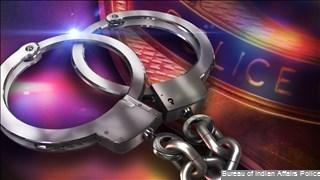 A Van Buren County K-9 Deputy arrested a man who led deputies on a chase.

The deputy was on mobile patrol Sunday afternoon when he saw a pickup truck speeding on M-43 in Almena Township.

A 19-year-old male from Vicksburg, Michigan was allegedly traveling at a speed of 86 mph in a 55 mph area.

The deputy attempted to pull the truck over for the violation but the truck proceeded to drive down into the ditch passing numerous vehicles on the right.

The pickup turned southbound onto 30th street and accelerated to over 100 mph, according to deputies.

Deputies pursued the pickup truck to all the way Kalamazoo County.

The driver slowed down and deputies were able to apprehend him.

The driver was taken into custody without incident.

After the arrest was made, the 19-year-old male said he failed to stop because he knew he had a warrant for his arrest, according to the report.

Deputies say a small amount of marijuana and paraphernalia was in the vehicle.