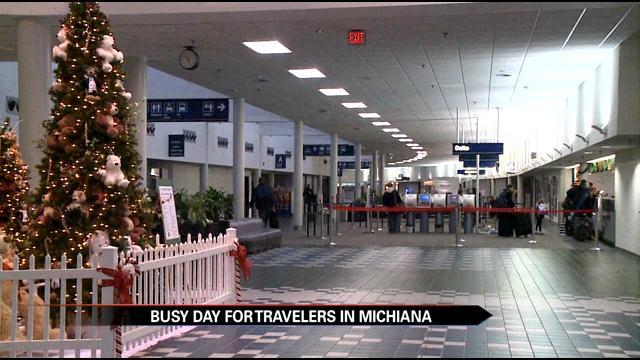 SOUTH BEND, Ind. -- AAA projects over 98 million Americans will be traveling at least 50 miles or more during this year-end holiday season, that includes thousands at South Bend International Airport.

"This is the first time that i've had to make this trip for christmas," said Luke Sernau.  Sernau is a South Bend native returning home from Seattle where he writes code for Facebook. "It's great to come home and see everything that i grew up with still here."

Despite the holiday hassle that many others might have to put up with while traveling, Sernau says his journey has been more of a christmas miracle, all thanks to an early start. "I grabbed an early flight and that helped a lot. I was worried it was going to be a little crazy, but i got here without any trouble,” said Sernau.

While many chose to head home by plane, others are deciding to use more locomotive means. "It's great to not have to go through security lines and ten-hour rides home," said David Lenz. Lenz is a senior at Notre Dame taking the South Shore train to Chicago to see his folks for Christmas. "I've basically been taking this train since freshman year and it's been pretty easy. I can just sleep on the train and in 2 1/2 hours, I'm home,” said Sernau.

AAA anticipates 2014 to be the busiest year-end travel period on record so far, in part to cheaper gas prices and reduced round-trip air fare.