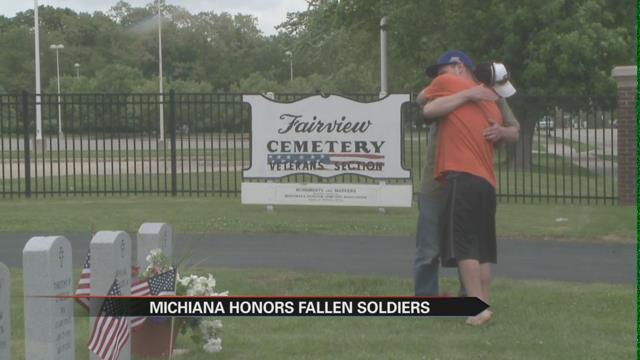 Memorial Day is a time to remember those who have fallen while serving our country.

A 27 year old veteran, Stanley Zebroski from Mishawaka, makes it a point to visit veteran's grave sites on the holiday.

He says Memorial Day is more than just a three day weekend.

"Memorial Day is for the people who didn't have the opportunity to come home."

Zebroski came home after spending time in Iraq after he was deployed in 2009.

A member of the United States Army, Zebroski will never forget his tour of duty.

"Walking through the streets of Baghdad, and it took a toll."

After fighting for our freedom, Memorial Day means something different to him.

Every year he pays his respects, and some graves stones stay engraved in his mind.

"There's actually a gentleman on the other end of the cemetery, he is actually my age, and every time I come here I spend a little more time at that headstone."

That gentleman is Benjamin Rast. He was from Niles, Michigan, went to Brandywine High School, and was the first American killed by friendly drone fire back in 2011.

Zebroski wants those in Michiana to understand that sacrifices, like Rast's, should mean something.

"Just know that it wasn't for nothing."

He was able to share that grief with Rast's father.

"His son means a lot to me, because he's my reality, it's more of a reflection and in a weird way, Benjamin is me."