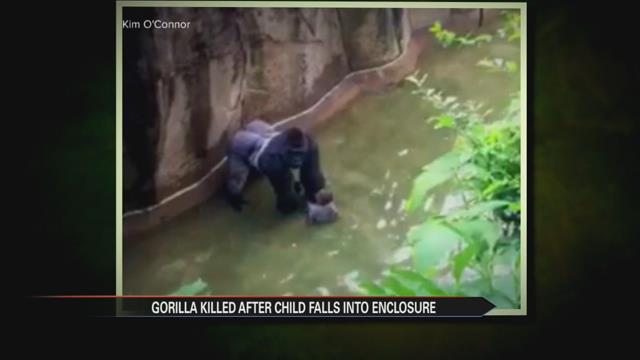 A witness present at the Cincinnati Zoo says the 450-pound gorilla that was shot and killed after a 4-year-old boy fell into his enclosure was not "hurting" the boy, but instead seemed to be "protecting him."

"The little boy, once he fell, I don't think the gorilla even knew that he was in there until he heard him splashing in the water," Brittany Nicely told ABC News on Sunday, explaining that zoogoers' screams drew more attention to the Saturday afternoon incident.

"The gorilla rushed the boy, but did not hit the boy," Nicely said. "He almost was guarding the boy, was protecting him."

Video obtained by ABC News shows the gorilla dragging the small boy through the water in the enclosure, and the zoo said that the fire department reported that "the gorilla was violently dragging and throwing the child."

The boy was hospitalized and released Saturday, zoo officials said Sunday. The boy's family said in a statement today that the boy "is home and doing just fine."

Zoo officials said after the boy crawled through a public barrier at Gorilla World at the Cincinnati Zoo and Botanical Garden, he fell about 15 feet into a moat that contained about 1 foot of water. He was then picked up and carried around by the male gorilla, named Harambe.

Nicely said the gorilla was "hovering over him... Like he was his own."

"The gorilla wasn't hitting him, wasn't hurting him. He was curious. He was checking him out, looking at his hands," she said. "The gorilla was not, in my eyes being harmful. However, it is a 400-pound gorilla ... so his intentions of not harming him still may have because of the size difference."

A Cincinnati Zoo employee shot the gorilla with a rifle when the child was in between his legs, and zoo employees then unlocked the gate and firefighters quickly retrieved the child.

"We are heartbroken about losing Harambe, but a child’s life was in danger and a quick decision had to be made by our Dangerous Animal Response Team," Zoo Director Thane Maynard said in a statement today.

"With the child still in the exhibit, tranquilizing the 450-pound gorilla was not an option," Maynard said. "Tranquilizers do not take effect for several minutes and the child was in imminent danger. On top of that, the impact from the dart could agitate the animal and cause the situation to get much worse.”

The boy's family said in a statement today: "We extend our heartfelt thanks for the quick action by the Cincinnati Zoo staff. We know that this was a very difficult decision for them, and that they are grieving the loss of their gorilla."