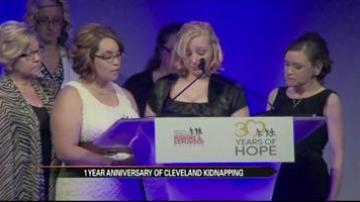 It has been one year since Amanda Berry and Gina Dejesus were rescued from captivity in Ohio.

Amanda Berry and Gina Dejesus were honored Tuesday with the Missing and Exploited Children's Hope Award.

They stood side-by-side as they accepted the awards.

"It's not just for us, but for all the missing kids and their families. If I could say only one thing, it would be this: Never give up hope because miracles do happen," said Berry.

In August 2013, their captor was sentenced to life in prison, plus a thousand years after he pleaded guilty to 937 counts brought against him.

He committed suicide in his prison cell in September.