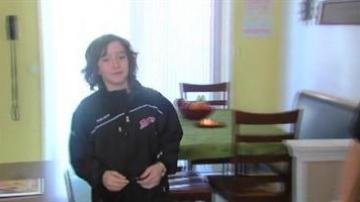 HOWELL, Mich. -- A ten-year-old boy is being hailed as a hero for saving the life of an 80-year-old woman in Detroit.

Danny Dipietro was in the car with his dad when he spotted something in an open garage late Saturday night.

At the time he thought it was a dog and asked his dad if they could check it out.

When they walked closer they found Kathleen St. Onge who had slipped on some ice and had been stranded in the cold garage for nearly two hours.

"She said she kept praying to the Blessed Mother and she just kept thinking if someone doesn't find me I'm going to be dead," said Sandy St. Onge-Mitter, Kathleen's daughter.

The woman is still in the hospital where she is being treated for dehydration and hypothermia.

Her doctors told the family she could not have survived another hour of exposure.