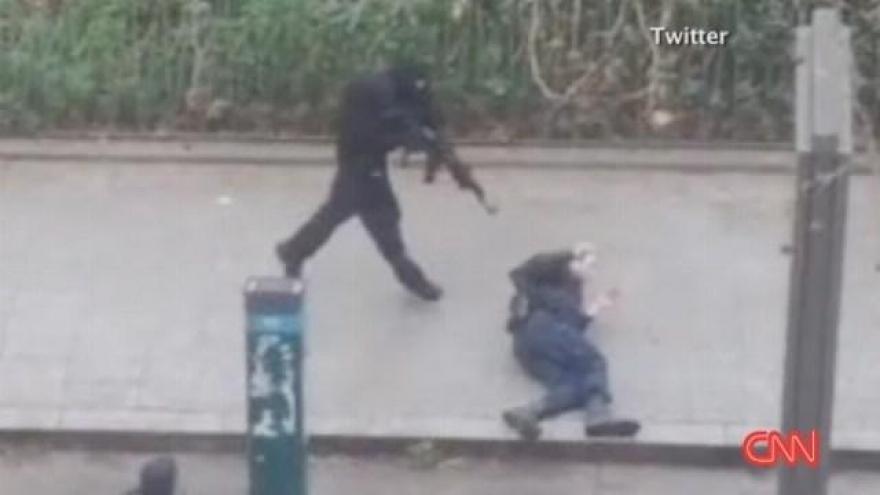 
(CNN) -- Hooded, black-clad gunmen burst into the office of provocative French satirical magazine Charlie Hebdo on Wednesday, killing 12 -- an attack that could be a game changer, given that the terrorists appeared well-armed, well-coordinated and, since they escaped onto the streets of Paris, capable of striking again.

While Europe is no stranger to militant Islamist terrorism in the age of al Qaeda and now ISIS, this was no "lone wolf" attack involving one person as has happened in the past. The assailants concealed their identities and seemed very organized, right down to their getaway.

The fact the gunmen remained at large Tuesday night means another bloodbath could happen at any time, whether they belonged to a larger group or not.

"We need to find the actors of this terrorist act," French President Francois Hollande said. "They must be arrested and brought before judges and condemned as quickly as possible. France is shocked today."

• Around France and the rest of Europe, thousands turned out for rallies Wednesday evening, expressing solidarity with France and Charlie Hebdo and defiance to those behind the bloodshed.

At an event in Paris' Place de la Republique, demonstrators held up pens in honor of the slain cartoonists and chanted, "We are Charlie!" Pictures posted online showed similar demonstrations in other cities, including Rome, Berlin and Barcelona.

• In the Wednesday attack, the gunmen said "Allahu akbar" -- which translates to "God is great" -- and that they were avenging the Prophet Mohammed, Paris Prosecutor Francois Molins told reporters.

• Charlie Hebdo editor and cartoonist Stephane Charbonnier, known as "Charb," is among the dead in the attack, a police spokesman in the district where the office is located told CNN. At least three other well-known cartoonists -- known by the pen names Cabu, Wolinski and Tignous -- were also killed.

• In addition to the 12 dead, 11 people were wounded, including four in "serious condition," the prosecutor said.

A witness who works in the office opposite the magazine's told BFMTV that he saw two hooded men, dressed in black, enter the building heavily armed.

"We then heard them open fire inside, with many shots," he told the channel. "We were all evacuated to the roof. After several minutes, the men fled, after having continued firing in the middle of the street."

One unsettling video, posted to YouTube, shows two men shooting on a Paris street, then walking up to and firing point-blank at a seemingly wounded man as he lay on the ground.

Video shows a gunman approaching his getaway car and raising his finger in the air in what appears to be a signal, possibly to another vehicle or other people who might have played a role in the attack, a Western intelligence source briefed on the French investigation told CNN.

Interior Minister Bernard Cazeneuve said that all means are being used to "ensure as quickly as possible we can identify the (attackers) and (arrest them), so that they can be punished with the severity that their barbarous acts are worthy of."

Prime Minister Manuel Valls raised France's security to its highest level -- "attack alert" -- after the Charlie Hebdo bloodshed. That means there will be reinforced security at media company offices, major stores, religious centers and on public transport, Valls' office said in a statement.

All available forces have been mobilized, with civil and military reinforcements as part of this plan. In addition, regional authorities have been instructed to step up their vigilance.

These steps were clearly visible in well-trafficked spots around France by evening, with armed soldiers standing guard outside monuments, in transit stations and elsewhere.

U.S. counterterrorism agencies are looking at a number of groups, including ISIS and al Qaeda, that might be responsible for the attack. Charlie Hebdo has been singled out as a target for Islamist extremists in al Qaeda's publication, Inspire.

Police impounded a black Citroen in northeastern Paris similar to the one purportedly used by the attackers as a getaway car. Video from CNN affiliate BFMTV shows the vehicle being towed from Porte de Pantin, in Paris' 19th district.

Investigators will do a complete DNA work-up on the Citroen, including soil signatures that might suggest where the gunmen came from, a Western intelligence source briefed on the probe told CNN.

The same source said that French authorities are searching all travel records from the past 17 days to see whether any of the attackers entered the European nation over the holidays. This includes checks at Charles de Gaulle and Orly airports, as well as whatever limited information is available from train stations.

Charlie Hebdo is no stranger to controversy for having lampooned a variety of subjects, including Christianity. But what it's done on Islam has gotten the most attention and garnered the most vitriol.

Its last tweet before Wednesday's attack featured a cartoon of ISIS leader Abu Bakr al-Baghdadi and the words, "And, above all, health."

Earlier cartoons depicting the Prophet Mohammed -- depictions that are deplored by Muslims -- spurred protests and the burning of the magazine's office three years ago.

In November 2011, Charlie Hebdo's office caught fire the day it was due to publish a cover making fun of Islamic law.

A year later, in an interview with Le Monde newspaper, Charbonnier gave little indication that he planned to change Charlie Hebdo's ways.

"It may sound pompous," he said, "but I'd rather die standing than live on my knees."

His death, and those of seven others, spurred a wave of support for the publication and its practices around France and the world.

This was evident on social media, where a trend emerged of people tweeting past covers from the magazine as well as the words "Je suis Charlie," or "I am Charlie."

U.S. President Barack Obama said the "attack on journalists (and) the free press ... underscores the degree to which these terrorists fear freedom." And Hollande, the French President, vowed that "no barbarous act will ever extinguish freedom of the press."

"We knew that we were threatened like other countries in the world," the President added later. "We are threatened because we are a country of freedom."