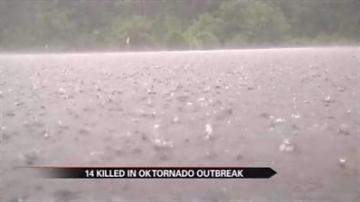 OKLAHOMA — Those in Central Oklahoma are bracing for another chance of rain and flooding just days after several tornado outbreaks ripped through the area.

Several of the victims are families, including seven people who tried to find shelter in a storm drain but eventually drowned.

The five tornadoes that touched down near Oklahoma City killed 14 people; six more are still missing.

That same storm system has now moved northeast where it has already knocked out power to thousands in New England.