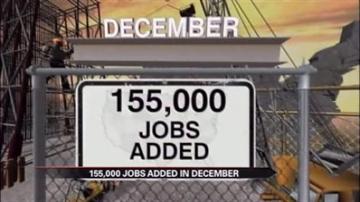 Some good economic news, the latest jobs report is out and it looks promising.

Unfortunately it wasn't enough to make a dent in the unemployment rate, which is still at 7.8%.

"182,000 Americans got in the labor force. That means they went out there looking for jobs. That means people are getting more optimistic out in the streets," said Jeff Macke, Yahoo Finance.

Jobs were added in health care, construction, and manufacturing.

Rebuilding efforts from Superstorm Sandy are believed to be a factor in those industry boosts.