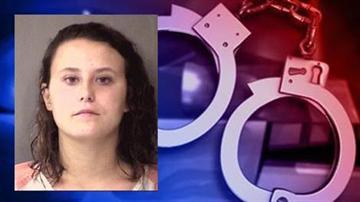 According to the Kosciusko County Sheriff's Office, a deputy saw a vehicle driving at a high rate of speed on Winona Avenue around 4:20 a.m. The vehicle didn't stop at the stop sign at the intersection with Zimmer Road.

The deputy attempted to conduct a traffic stop, but the vehicle fled from deputies at speeds up to 110 miles per hour.

The car eventually went off the road on West Crystal Lake Road.

The driver, Destinee Nicole Robinson-Moore, was taken into custody and preliminarily charged with felony fleeing/resisting law enforcement with a vehicle, reckless driving, minor consumption of alcohol and driving while suspended.

During the investigation, deputies determined Robinson-Moore struck a roadway sign and a mailbox during the pursuit, according to deputies.

She is being held on $2,000 bond in the Kosciusko County Jail.