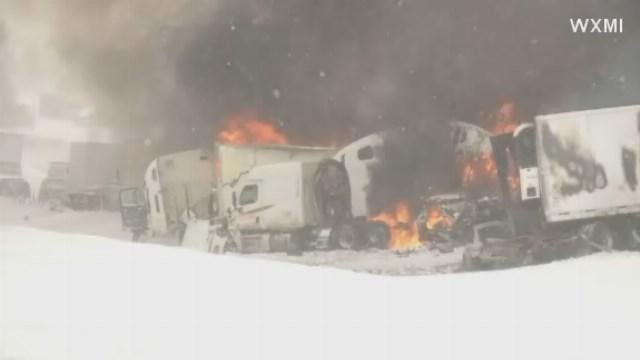 At 10:00 a.m., first responders went to eastbound I-94 for a multiple vehicle/semi accident.

By noon there were 50-70 vehicles involved in multiple accidents in both the westbound and eastbound lanes.

Four semis and 2 vehicles caught fire and Michigan State Police evacuated everyone from the area because of hazardous materials. In addition, a semi hauling fireworks was next to a semi that was on fire.

By 1:45 p.m., all of the fires had been extinguished and the evacuation orders were all rescinded.

23 people sustained injuries that required treatment at a hospital.

A 57-year-old semi driver from Quebec was killed in the accident. Two firefighters and a wrecker driver were injured when fireworks exploded.

The freeway is expected to be shut down the rest of the day, according to MSP.

Drivers who were involved, but were not injured, were taken by bus to a Galesburg school while authorities investigate the crash.