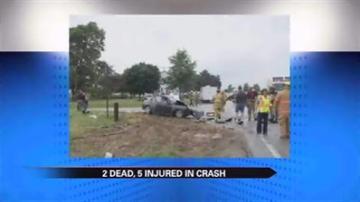 HENRY COUNTY, Ind. — Two people are dead and five others injured after a car accident in Henry County, Indiana.

The crash happened on U.S. 35. Police say it was heavily raining at the time of the accident, which caused a car to hydroplane.

That car spun into the path of an oncoming car. The driver of the second car and his passenger died at the scene. Another man and two children, who were also in the car, were taken to the hospital.

The driver of the first car was also taken to the hospital.