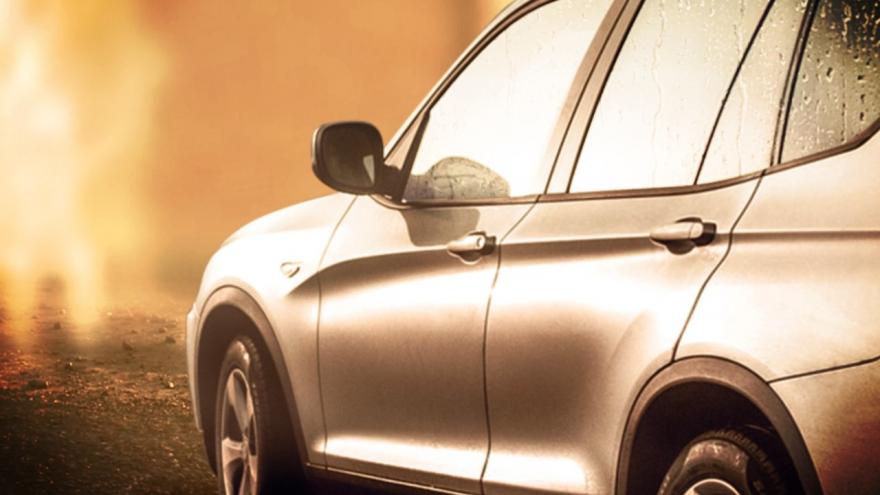 By Ralph Ellis and Tina Burnside

(CNN) -- Two young sisters died after after their mother intentionally left them in a car for more than 15 hours, Texas authorities said Friday.

Hawkins and a 16-year-old male friend initially took the children to Peterson Regional Medical Center in Kerrville, but the girls were found to be in "grave condition" and transferred to University Hospital in San Antonio, the release said.

Brynn Hawkins, 1, and Addyson Overgard-Eddy, 2, died there about 5 p.m. Thursday, the release said.

Authorities became suspicious after Hawkins told hospital personnel that she, the 16-year-old and the two children had been at a nearby lake, where the girls smelled flowers before collapsing, the news release said.

"They thought maybe they'd gotten into something poisonous -- that's what their story was," Hierholzer told CNN affiliate KABB.

Investigators with the Kerr County Sheriff's Office and Kerrville police determined the children actually had been left inside their mother's vehicle for 15 hours -- from Tuesday night until noon Wednesday -- while she and a 16-year-old male friend hung out with other friends inside a residence, the release said.

The sheriff didn't say what caused the deaths, but told KABB that temperatures reached into the 90s during the day on Wednesday.

People inside the house reported hearing the children crying but nobody went to check, he said to KABB.

The children were unconscious when Hawkins took them out of the car around noon Wednesday, the sheiff said.

She attempted to bathe them but didn't immediately take them to the hospital because she "did not want to get into trouble," according to the news release.

Her story quickly unraveled under questioning, the sheriff said.

Charges against her might be upgraded after the case goes to a grand jury, the sheriff told KABB, and the 16-year-old male may face charges.

"This is by far the most horrific case of child endangerment that I have seen in the 37 years that I have been in law enforcement," Hierholzer, said.

Hawkins was arrested in San Antonio and was being held in the Bexar County Jail before transfer to the Kerr County Jail. Kerrville is located about 65 miles northwest of San Antonio.

Autopsies were scheduled for Friday.

Another pair of young children -- a 2-year-old girl and a 16-month-old boy -- died May 26 in Parker County, west of Fort Worth, in what appeared to be a hot car incident.

Parker County Sheriff's Capt. Mark Arnett told CNN that according to the mother, the children were playing in a back room of their home when they disappeared. After searching the home, the mother began looking outside, where she eventually found them locked inside the car.

No charges have been filed yet in that case.