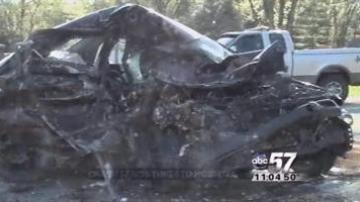 A 20-year-old female was injured so badly, she had to be flown by helicopter.  ABC57 talked with neighbors who saw it all go down.

Moyer said the impact was so loud, he heard it from his kitchen.

“It sounded like a bomb went off," said Moyer.

He looked out the window and couldn’t believe his eyes.

“I seen two cars flying through the air," said Moyer.

“I told 911 you are going to need an ambulance and fire trucks," said Moyer.

“I can say there was a 911 call about the driving displayed by the driver of the trailblazer," said Indiana State Trooper Annette Pellman.

Witness behind the SUV said the driver was swerving in and out of the center lane, forcing people off the road.  Until one driver didn’t move fast enough and this happened, trapping her in the wreckage.

“The first responders did take the door off the passenger car," said Trooper Pellman.

Moyer says crashes on this stretch of road are nothing new.

“Probably not even a month ago there were four people killed, the same distance, west of the house," said Moyer.

He said there are signs about the dangerous curves on the road, but people just don’t pay enough attention.

“It’s the people not the road," said Moyer.

Police are still investigating the cause of the accident, however Trooper Pellman did tell me she thinks the driver may have been on prescription drugs.  She said she won’t know for sure until the toxicology results come back.