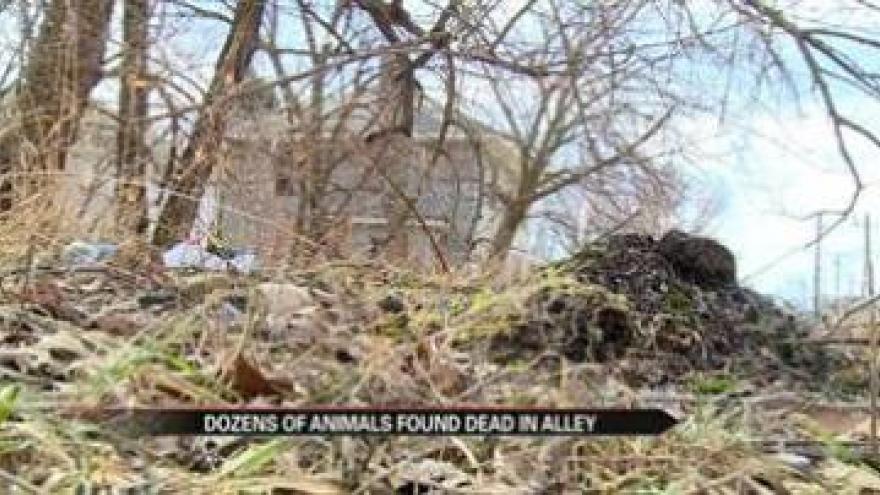 SOUTH BEND, Ind. -- Residents on Indiana Avenue were shocked to hear about the gruesome find in their alley. A little girl stumbled upon 21 dead animals piled up and laid out in rows.

Police said there were cats, rabbits, squirrels and a possum, all in various states of decomposition.

Kelley Rahmah's cat Tiger has been missing since December.

A little girl from the neighborhood found him in the alley dead.

"She came to my house and she said, 'Kelley I think I found Tiger. And he's dead in the alley,'" said Rahmah.

Rahmah said she couldn't believe her eyes when she walked down the alley near her home.

"It was just a horrible sight to see. It looked like something from a horror movie," said Rahmah.

There was a pile of dead cats - and her cat Tiger was in the middle of the pile.

"Some of them had collars on. We found rabbits dead everywhere. We found a possum that was gutted and hanging from a tree," said Rahmah.

Now police and Animal Care and Control are stepping in.

"This is something that is certainly alarming which is why we've addressed it so quickly. It's definitely a priority," said Matt Harmon, Shelter Manager at South Bend Animal Care and Control.

Investigators say this wasn't the usual ritual-type killing and there was no mutilation of the animals. So police say the current theory is animal trapping gone wrong.

"It really to both of us looks like a dumping scene. Just somebody chose that location to either empty their traps or just to dump the animals there that they have trapped," said Lieutenant Scott Hanley of the South Bend Police Department.

The shelter will bring in a vet to conduct necropsies to determine the causes of death for all 21 animals.

"Obviously most people don't dump just 21 of your animals in somebody's yard. I personally take mine and get them cremated. That's just me. Was there cruelty here? That's what we need to determine," said Hanley.