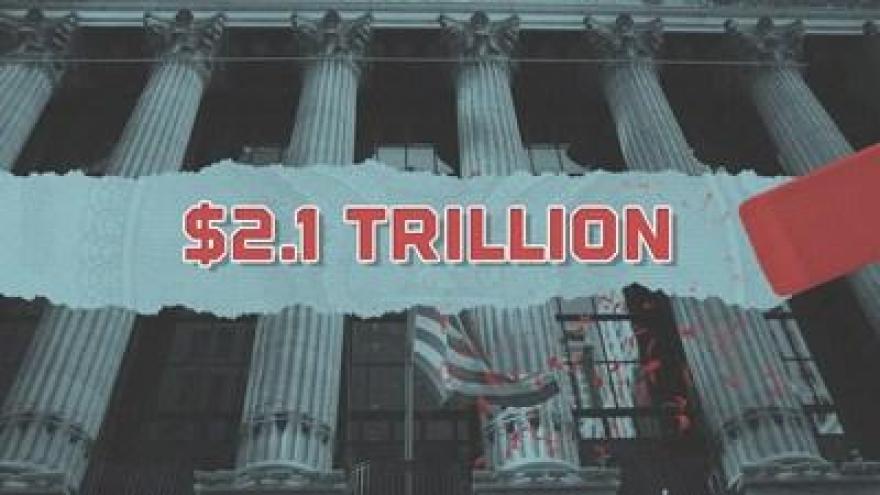 NEW YORK (CNNMoney) -- The American stock market has surrendered a stunning $2.1 trillion of value in just the last six days of market chaos.

The enormous losses reflect the deep fears gripping markets about how the world economy will fare amid a deepening economic slowdown in China.

The Dow, S&P 500 and Nasdaq have all tumbled into correction territory, their first such 10% decline from a recent high since 2011.

The S&P 500 -- the best barometer for the biggest U.S. companies -- has lost trillions of market value in the six-day selloff through Tuesday, according to S&P Dow Jones Indices.

Here's another way to look at it: It's like erasing almost the entire value of the British version of the S&P 500. Known as the S&P BMI U.K. Index, it is worth just $2.8 trillion.

The heart stopping part of of the market slide occurred on Monday, with the Dow's unprecedented 1,089-point decline just minutes after the opening bell.

The recent turmoil has wiped out not only 2015's stock market gains but nearly all of 2014's as well. The Dow ended Tuesday at the lowest level since February 2014.

The dramatic retreat on Wall Street has been fueled by serious concerns about the fallout of China's economic slowdown. While everyone already knew China's economy was no longer enjoying explosive growth, investors have seized on possible new signs the slowdown is more serious.

China's stock market imploded earlier in the summer. It wasn't clear if it was simply the bursting of a stock market bubble or a red flag about deeper issues in China's economy.

And then China shocked markets by devaluing its currency, the yuan, on August 11. The move smacked some as a desperate attempt to boost exports by making its goods cheaper to foreign buyers.

Fears deepened last week when a key gauge of Chinese manufacturing activity plummeted to the lowest level since the global financial crisis. All of this has had the combined effect of sending the Chinese stock market down over 40% just in the last two months.

Is the selloff warranted?

But do these credible concerns about China's economy justify the huge selloff on Wall Street? And are further large losses in the cards?

Merrill Lynch argues that U.S. equities "remain vulnerable" in the near term because stocks have broken down below several key levels and momentum stocks are tumbling.

Yet unlike the stock market, the American economy is not tanking. Just on Wednesday Barclays boosted its tracking estimate of third-quarter gross domestic growth to 2.8%. That's nowhere near a recession. In the current environment of lackluster global economic growth, that actually qualifies as pretty strong.

And it's not like interest rates are shooting higher, creating a drag on stocks. Central bankers around the world are flooding the system with cash and keeping rates extremely low. Bill Dudley, the president of the New York Federal Reserve, signaled the U.S. central bank may shelve its plans to raise rates next month until later in the year or even 2016.

If the economy isn't collapsing, then that means corporate profits should remain relatively solid, outside of the oil-ravaged energy sector. Profits are critical to stock prices.

Is now the time to bargain hunt?

But prices have tumbled in recent days, seemingly undercutting the argument that American stocks are too expensive.

Just look at the Dow's price-to-earnings ratio, a key valuation metric. On average Dow stocks now trade for 15.5 times this year's expected earnings and only 14 times next year's, according to ConvergEx. While that's not exactly dirt cheap, it's a big improvement from multiples north of 18 just a few months ago.

And if the markets go even lower in the current volatility "we're getting to levels where the fundamentals show compelling value," said Nicholas Colas, chief market strategist at ConvergEx, in a note.