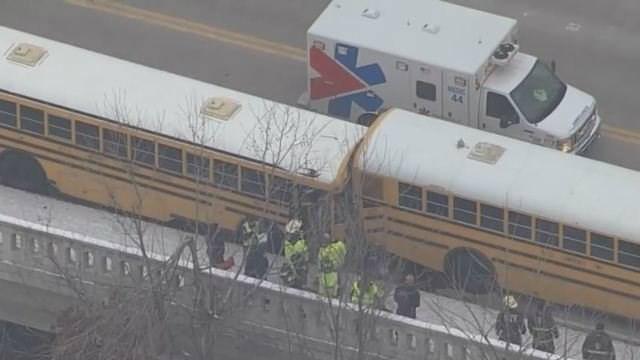 Indianapolis, Indiana -- 25 students and two bus drivers from Lawrence Township were taken to hospitals Friday morning following a school bus crash on the northeast side.

It happened around 8:30 a.m. on an overpass just before the intersection of Fall Creek Road and Shadeland Avenue.

The buses were on their way to Lawrence North High School when one rear-ended the other as it headed north on Shadeland.

A total of 30 high school students were on the two buses.

At least five students and the two bus drivers are at Community North. None were seriously hurt.

Six students, ranging in age from 14 to 17, were taken to Peyton Manning Children's Hospital with non-life threatening injuries.

Several students are at Eskenazi and the rest were checked out by medical personnel on the scene and then loaded onto another school bus.

Nearly a half-dozen ambulances and fire trucks responded to crash site. Indianapolis EMS says it sent seven vehicles to the scene to assist. Parents also were showing up to check on their children.

Fall Creek and Shadeland reopened to traffic around 10:30 a.m.

The cause of the crash is still under investigation