3 Californias? The initiative to break up the state may be on the ballot in November 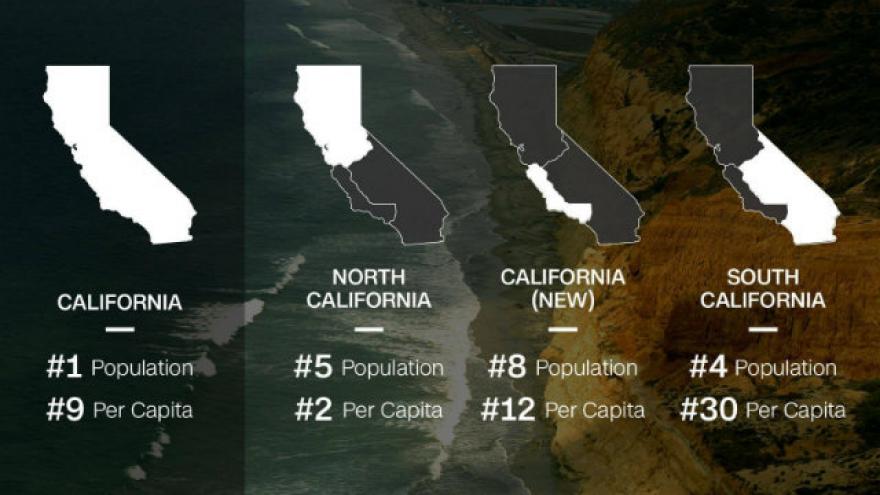 A local venture capitalist\'s proposal to break up California, \"CAL 3,\" gained nearly double the necessary signatures to get it on the ballot in November, which will allow state voters to decide on the partition. Photo courtesy Getty Images

(CNN) -- Should the country's most populous state be split into three separate states? California voters might be able to make that decision this fall.

A local venture capitalist's proposal to break up California, "CAL 3," gained nearly double the necessary signatures to get it on the ballot in November, which will allow state voters to decide on the partition.

Tim Draper announced Thursday that his initiative had gotten more than 600,000 signatures from registered voters across all of the state's 58 counties, surpassing the 365,880 signatures required by state law.

"This is an unprecedented show of support on behalf of every corner of California to create three state governments that emphasize representation, responsiveness, reliability and regional identity," Draper said.

How could this help California?

According to the proposal, first announced in November, this will solve California's most pressing issues, including the state's failing school systems, high taxes, deteriorating infrastructure and strained government.

Draper explained that partitioning California into three states would empower regional communities to make better and more sensible decisions for their citizens.

"To create three states from a standing start, you'll get all the benefits of knowing all the things that worked in the past, and all the things that could work in the future and you get to eliminate all the baggage you got in the state," Draper said in a news conference Thursday night at Draper University.

"When you get together and you start something fresh, you have a new way to look at it and create better things" he added.

Draper also suggests that California citizens would be better served by three smaller state governments while preserving the historic boundaries of the various counties, cities and towns.

Northern California: This would include the Bay Area and the 31 remaining counties north of Sacramento.

Draper says CAL 3 will deliver the 600,000 signatures to the secretary of state next week and the signatures will then have to be vetted and approved.

CNN reached out to Secretary of State Alex Padilla, but he refused to comment until he receives the signatures.

If the measure is approved by voters, the governor will transfer the notice of state approval to Congress, which will

vote to ratify the creation of the new three-state structure.

Constitutional lawyer and professor Jonathan Turley told CNN that congressional approval is not impossible, but not likely to happen, as Democrats could feel they have too much to lose.

Turley explained that with the creation of two new states, this would likely add four new members to the US Senate, something that could create endless tensions between representatives.

Draper backed a proposal to turn California into six states in 2014 but it failed to get the required number of signatures to qualify, and the measure was not presented to voters in the 2016 polls.