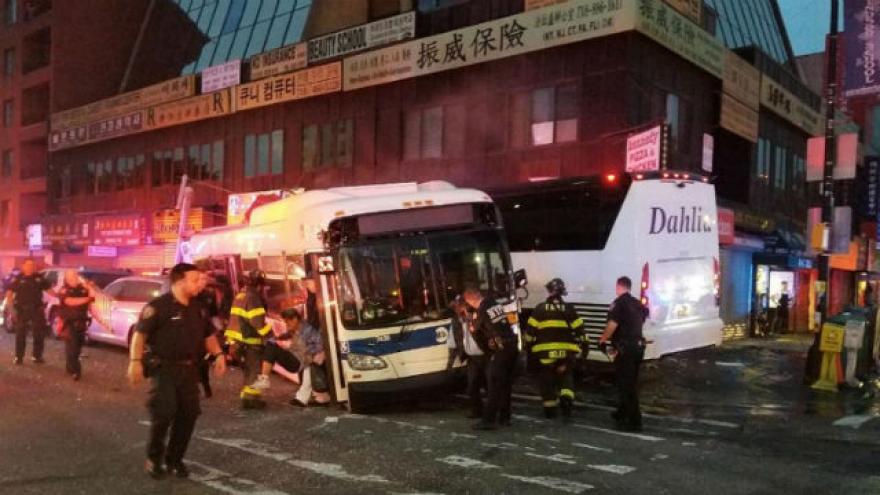 (CNN) -- Three people were killed and 16 were injured after a Metropolitan Transportation Authority bus and a private tour bus collided in Queens, causing one of the buses to crash into a building.

The driver of the Dahlia Travel and Tours bus, which struck the building, was killed in the crash, along with a passenger in the MTA bus and a pedestrian on the sidewalk, according to the NYPD.

"We've had a really tragic morning here in Flushing, Queens. Just shocking to see the scene over there. Hard to compare it to anything I've ever seen, the sheer destruction from the impact of this collision," said Mayor Bill de Blasio during a press conference Monday morning.

According to the MTA, a Q20 bus was struck by the private bus on Northern Boulevard and Main Street at 6:21 a.m. Investigators were interviewing the driver of the MTA bus, who is among the injured.

The injured all have been transported to nearby hospitals, de Blasio said.

"The first thing we need to understand is what happened here," he said, "because we do not know exactly what happened, if anybody was specifically at fault."

The FDNY was working on accessing the building impacted by the crash to make sure it is secure and safe.

"The impact of this collision on the building was very, very substantial," said de Blasio.

The cause of the collision is still being investigated.

"Very concerned about the speed, but the most important thing is safety. We want to make sure we understand exactly what happened and we prevent this from ever happening again," said MTA Chairman Joe Lhota.

A representative for Dahlia Travel and Tours could not immediately be reached for comment.