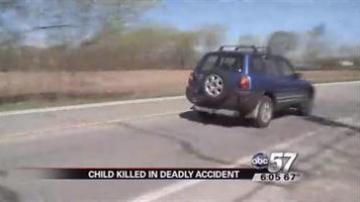 An Elkhart County family is grieving after a four-year old boy ran into the street and was killed after being struck by a vehicle. It happened Friday night around 8:15pm along State Road 15, north of Goshen.

Police said 4-year old Ezequiel Ramirez was chasing a soccer ball across the road. When he tried to come back to his families front yard, he ran in front of a car, and the driver wasn't able to stop in time.

19-year old Mitchell Eby was out in the yard, when he heard a crash just yards from his home.

"I knew there were kids out there playing and I heard a loud noise and turned around and saw the guy in the road" said Mitchell.

He said he turned around to see 4-year old Ezequiel Ramirez lying in the road. That's when he ran inside and had his mother call 9-1-1.

"I knew he was serious and I did right away. I can see from my living room window. I can see the highway. And I saw a child laying there and it was really bad" said Rachel Eby.

Unfortunately this wasn't the first accident along this stretch of road. Abc 57's Eric Steltzer talked to neighbors who said the areas been a problem for quite some time. In fact, there was an accident nearby just two years ago.

A second tragedy in just as many years for the same family. The Eby's say their neighbors daughter was also hit by a car near the same spot. She survived, their nephew did not.

"It was a very sober mood and it didn't look like anyone slept well last night" said Rachel.

Witnesses say that a woman gave CPR to the boy until medics arrived, but he died on the scene.
Right now, the Elkhart County crash investigation team is still looking into the accident.
No charges have not been filed against the driver.