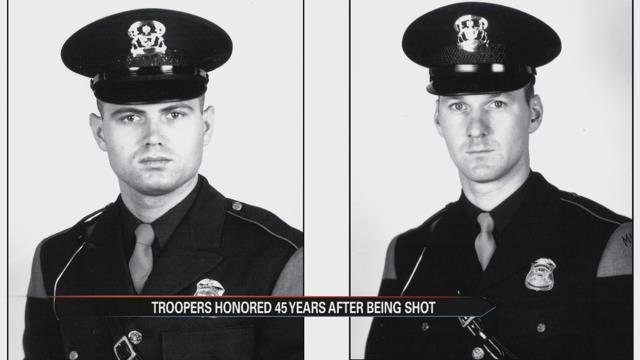 It's been 45 years, but to many in Michigan, it feels like just yesterday that Troopers Gary Rampy and Charles Stark were shot and killed during a traffic stop of a suspected drunk driver.

Trooper Stark's sister, Janell Smith, had just turned 18 when she lost her brother. The overwhelming attendance at the service, meant a lot to her.

"I'm just proud to be my brother's sister," she says. "It puts a smile on my face that even after 45 years, they are remembered."

But they are not just remembered by blood relatives.  The brothers in blue stood together with the community, to remember the brothers they've lost.

One Albion officer went above the call of duty.  Lt. Mike Johnson had only seen pictures of Troopers Stark and Rampy when he worked in Three Oaks. When he moved over to Albion, he met Trooper Rampy's sister.

"[She] lives in my jurisdiction. I knew she was elderly, and was going to have a hard time getting here today," explains Lt. Johnson. "So our agency volunteered to drive her here to the services."

He didn't seem to think it was a big deal, but others said, it spoke volumes.

"I'm thankful that the community and people recognize the fact that these gentlemen gave their lives and sacrifice a lot, to help keep them safe," says Lt. Melinda Logan, with Michigan State Police. "It's exceptional that they spent their day to come out and recognize them.

Lt. Logan says today was a time to appreciate the ultimate sacrifices given.

"Be friendly. Wave. Say hi," adds Lt. Logan. "We've had a lot of people that we've lost, and sometimes, just that little extra hello and wave, helps us make our day better."

Smith agrees, and says she just wants wants one thing.

"Back up our guys in Blue. They put their lives on the line every day," she says. "I get very irate when I see disrespect being shown towards them because they do. They put that uniform on, and they're a target.

And with it, a reminder: that each day is a gift.

"Some of them die in the process. They go out every day, not knowing if they're going to come back," Smith says.