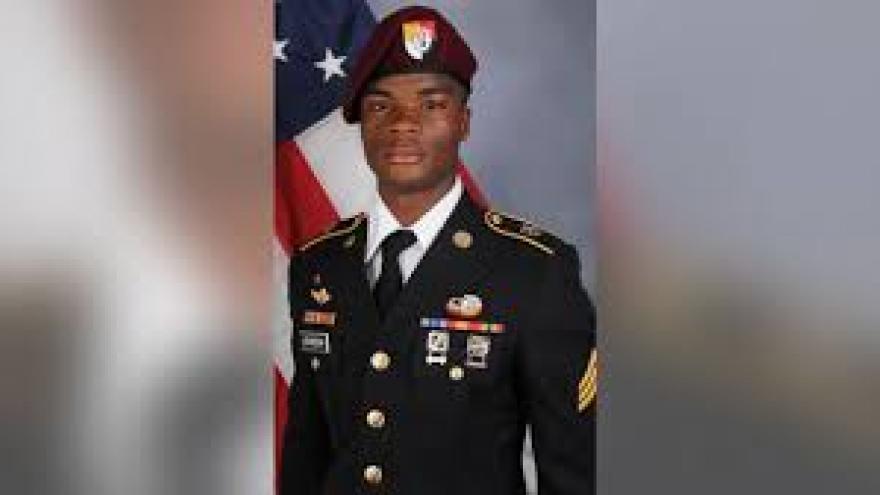 (CNN) -- The Defense Department has identified the fourth service member killed in an ambush in Niger on Wednesday as 25-year-old Army Sgt. La David Johnson.

Johnson was killed by enemy fire in the ambush, the Pentagon said. His body was recovered by US personnel Friday in a remote area of the northwestern African country by Nigerian troops nearly 48 hours after he was discovered missing in the wake of the attack, US officials told CNN on Friday.

Johnson's group was attacked near the Niger-Mali border by up to 50 fighters thought to be affiliated with ISIS, a US official said.

The 12-member US team was leaving a meeting in unarmored pick-up trucks when they began taking fire from small arms, machine guns and rocket-propelled grenades, according to a US defense official.

With window glass exploding all around them, the service members, including multiple Army Special Forces soldiers, exited the vehicles, ran for cover, and began returning fire, killing some of the attacking militants.

It is unclear how Johnson became separated from the rest of the advisory team during the firefight. None of the other soldiers with Johnson witnessed him being captured or taken away by enemy forces.

The US military said it does not believe Johnson ever fell into enemy hands, but had reason to believe he might be alive. Military officials launched an urgent search-and-rescue mission after receiving electronic signals that indicated Johnson might be alive in the field.

The US military initially issued a statement Thursday saying the attack left three US service members dead and two wounded.

The large-scale search-and-rescue operation involving US, French and Nigerien troops was launched soon after US officials realized one of the US service members was unaccounted for.

Elite US special operations forces troops were flown in from the continental US to aid in the recovery effort. US Navy SEALs were deployed to a US military base in Sigonella, Sicily, in anticipation of a possible rescue attempt, but never went into Niger.

"We had everything, jets, rotary wings, (Intelligence, Surveillance, and Reconnaissance), various platforms, human intelligence, signals intelligence, you name it," US Army Col. Mark Cheadle, a spokesman for Africa Command told reporters at the Pentagon Friday via a phone call. "There was a full-court press by all of (the Department of Defense), the Nigerien government, the Department of State and the French to help us recover our lost one."

He added that the Nigerien troops who found the body in the vicinity of the attack transferred the remains to a team of US Special Operations Forces who flew the body to the capital, Niamey, where it was identified, Cheadle said.

Cheadle said the Nigeriens were "very respectful" and "fully aware of the need to honor the fallen."

A US official says a full investigation into what happened is underway.

Cheadle told reporters that Africa Command was reevaluating its force protection procedures for its advisory missions.

"This was not expected," Cheadle said, adding "had we anticipated this sort of attack we would have absolutely devoted more resources to it to reduce the risk and that's something we are looking at right now."

A spokeswoman for the French Ministry of Defense told CNN Thursday that French troops from the Barkhane anti-terror force based in neighboring Chad were involved in an operation in Niger. She said the operation was led by Niger with French troops supporting them. US officials told CNN Thursday that French military Super Puma helicopters evacuated the wounded Americans along with those killed in action while also providing covering fire. The wounded were first flown to the capital Niamey and later to Landstuhl Regional Medical Center in Germany.

French military attack aircraft also flew to the area in an attempt to support US personnel on the ground.

"Our allies the French were very quick to respond," Cheadle said.

Five Nigerien soldiers also were killed in the attack, according to a Nigerien security official.

About a platoon-sized element of Nigerien troops were accompanying the US team.

"We are resolved and stalwart in our efforts to go after those who attacked us," Cheadle said, adding that while the US military has "an idea" who was behind the ambush, he declined to identify the group involved.

The US soldiers were part of a team advising and assisting local forces.

All three soldiers were assigned to 3rd Special Forces Group (Airborne) at Fort Bragg, according to a statement issued by US Army Special Operations Command.

The attack occurred approximately 200 kilometers north of the country's capital, Niamey, in southwest Niger, according to the statement from Africa Command, which oversees military operations in Africa.

"US forces are in Niger to provide training and security assistance to the Nigerien Armed Forces, in their efforts to counter violent extremist organizations in the region," the statement from Africa Command said.

There are about 800 US troops in Niger and the US military has maintained a presence in the northwest African country for five years, with small groups of US Special Operations Forces advising local troops as they battle terrorist groups, including, Islamic State in Greater Sahara, the ISIS-affiliated Boko Haram and al Qaeda's North African branch, al Qaeda in the Islamic Maghreb.

"US forces are in Niger to provide training and security assistance to the Nigerien Armed Forces, including support for intelligence, surveillance and reconnaissance efforts, in their efforts to target violent extremist organizations in the region," US Navy Lt. Cmdr. Anthony Falvo, a spokesman for US Africa Command, said Wedensday, adding, "one aspect of that is training, advising and assisting the Nigeriens in order to increase their ability to bring stability and security to their people."

"Niger is an important partner of ours, we have a deep relationship with them," Lt. Gen. Kenneth McKenzie, the director of the Joint Staff, told reporters at the Pentagon Thursday. "We are committed to that relationship, we believe that they are as well in fact I think it's a very good success story."

US officials assess that these terrorist groups view Chad, Niger and Mali as being particularity important as they serve as bridges between north and sub-Saharan Africa, saying that local al Qaeda and ISIS affiliates use control of these transit routes to gain revenue that helps them recruit, expand and export attacks. ISIS uses these North-South transit routes to move fighters northward, where they can gain more easily access Europe and the West.

One official told CNN that ISIS is attempting to illegally infiltrate the gold mining industry in Niger to sell on the black market and finance world terrorism.

Al Qaeda in the Islamic Maghreb has maintained a presence in the Mali-Niger border area, despite a multi-year French-led military counterterrorism effort, Operation Barkhane, which began in 2014.

The US military has largely played a supporting role, providing intelligence, surveillance and reconnaissance assets in support French forces operating in Mali and Niger. The French operation involves thousands of French troops as well as forces from Germany, Mali, Niger and other countries in the region.

And while US troops largely play a supporting role in Niger, military leaders acknowledge the risks they face.

"Clearly there's risks for our forces in Niger," McKenzie said while declining to discuss the specifics of Wednesday's attack, citing "ongoing partnered operations."

"Any time we deploy full forces globally, we look very hard at the enablers that need to be in place in order to provide security for them and that ranges from the ability to pull them out if they're injured to the ability to reinforce them at the point of a fight if they need reinforcement," he said.

"Certainly to the soldiers in the fight it was combat," McKenzie added.

The Pentagon is in the process of establishing a drone base just outside the city of Agadez in Niger in an effort to bolster regional counterterrorism efforts. The US has been using a local Nigerien airport while the base is under construction, according to US Africa Command.