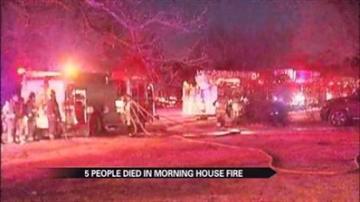 OKLAHOMA CITY. -- Tragedy in Oklahoma City on the day after Christmas. One adult and four kids died in a house fire Wednesday morning.

According to the fire chief, seven people were inside the home when the fire broke out.

The kids who died were between he ages of 2-8.

One person was taken to the hospital, another was hurt but refused treatment.

The fire chief said there were no working smoke detectors inside the house.