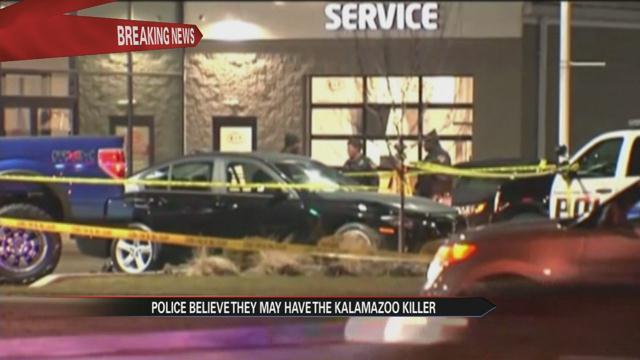 As of 7 a.m. per the press conference held by authorities, the 14-year-old girl who was previously reported as dead is still alive. Her condition reported as alive but "severely, gravely injured." At this time it is confirmed that 6 people were killed. Police are working to put together a timeline of events for this shooting. At this time investigators believe there are no other scenes. The names of the victims have not been released at this time.

Authorities in Michigan have been on a search for a man who they say drove around and shot people at random. In the early morning hours of Sunday, police caught up with the suspect, 45-year-old Jason Dalton and arrested him. Police found multiple weapons in his vehicle.

Kalamazoo County officials said the man killed at least seven people Saturday and eight people were shot in all.

It started around 6 p.m. Saturday night Police were called to the scene of a shooting at Meadows Townhomes complex. A woman there had been shot four times in the parking lot and is now in critical condition.

The next shooting happen at about 10 p.m. at a Seelye Kia car dealership. The suspect shot and killed a father and a son who were sitting in their car. It is possible another person was shot at this location but police are still investigating.

The third shooting location was at a Cracker Barrel restaurant near I-94. Four people were shot and killed in that shooting, including a 14-year-old girl.

Police located the suspect at just before 1 a.m. Sunday. He was in a dark colored Chevy HHR.

Officials believe all of the random shooting attacks are connected.

A press conference is scheduled at 7 a.m. to provide the latest information on the Kalamazoo County shootings.