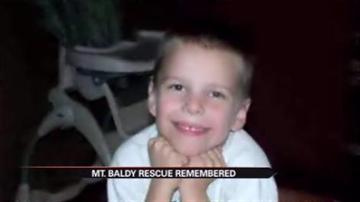 CHICAGO/MICHIGAN CITY-- Six-year-old Nathan Woessner is still recovering from being swallowed up by sand at the Indiana Dunes National shoreline.

Officials say he was on his way to Mount Baldy with his dad when he fell eleven feet under the sand and was trapped for four hours.

When emergency crews pulled him out he was unconscious and his body was cold.

Earlier today Abc 57 was in Chicago for a press conference with his grandfather.

Doctors say he may be released from the hospital in two weeks.

“She was hysterical she said dad, dad we can’t find Nathan he is under the sand,” said Woessner’s Grandfather Don Reul.

“He was nowhere to be seen; the ground had swallowed him up,” said Reul.

The Michigan City Fire Department rushed to the Indiana Dunes lakeshore to battle the sand.

“I actually had three vehicles of mine alone that got stuck in the sand,” said Michigan City Fire Chief Ronnie Martin.

Their chief Ronnie martin told me even with the ten thousand hours of training they do every year, nothing could have prepared his team for this difficult rescue mission.

“This particular incident you cannot train for,” said Martin.

After enlisting police, lifeguards, E.M.S., and the Red Cross and four hours of digging, Michigan City firefighters finally pulled the six-year-old out of the hole.

“When they found Nathan, he was cold and lifeless,” said Reul.

But then there was a miracle, a cut on Nathan’s face was bleeding so emergency responders knew he was alive and had a heartbeat.

They transported Woessner to the hospital.

Today while I talked with the fire chief, he told me he and his guys were extremely touched by the gratitude from Nathan Woessner’s Grandfather Don Reul during the Chicago press conference.

“The emotions that they had shown were something that I had not seen on the fire department,” said Martin.

The Michigan City fire crew are also setting up a fund to help the Woessner family to help pay for Nathan’s medical bills.

It will be through the Unity Foundation.