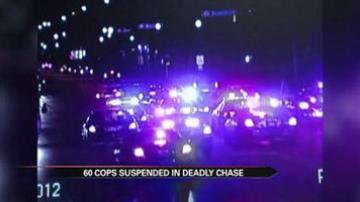 CLEVELAND -- The results are in of an investigation into a Cleveland police chase that turned deadly more than a year ago.

More than 100 police officers were investigated and now 63 have been suspended for their role in a chase that ended with a deadly shooting.

The chief of police says while many of the officers felt they were helping an officer in danger, they broke the rules.

"We're not throwing police officers under the bus for political reason and we're not covering up things that should have been done and was done wrong," said CPD investigator Jeffrey Follmer.

Those suspension notifications went out Tuesday but because the precinct is suspending so many they have to be scheduled to make sure there are enough officers on the streets.