$600 Worth of Meat Stolen from Restaurant 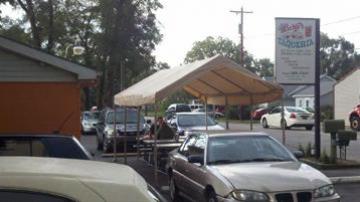 ELKHART, Ind. – Early Wednesday morning the owner of Ricky’s Taqueria on County Road 9 reported an unusual theft from the restaurant.  Someone had broken in and stolen $600 worth of meat.

“I can’t believe anybody would do that,” said customer Nathan Lavelle, who claims to eat at Ricky’s almost every day of the week.  “Their patrons are such loyal customers and they’re so good to everybody that comes in it’s obviously not a customer of theirs because they would never do it to those people.”

For the small, locally owned business $600 worth of meat could mean a lot.

“It’s abnormal in the fact that we don’t see a lot of stolen food cases come through the sheriff’s department,” explained Lt. Travis Adamson.

Though what was stolen is different from usual cases, the way the department handles this case won’t be.

“It’d get forwarded to the detective bureau and they’d investigate it just like any other property crime,” Adamson explained.

Some of Ricky’s loyal customers think the motive for this theft also might not be different than in standard cases.

“Bad economy is probably the reason for it,” guessed Nathan Lavelle.  “You got to put food on the table unfortunately sometimes that involves taking it off of someone else’s table.”

But, Lt. Adamson explained that good economy or bad, there’s no excuse.

“I would hate to associate it with a sign of the bad times,” Adamson explained.  “Because, regardless of what kind of time you’re having or what kind of trouble, there are always alternatives to stealing from other people.”

Whatever the reason, Ricky’s customers have a simple statement for the thieves.

“Give it back, do the right thing and make amends somehow,” said Nathan Lavelle.

The investigation is in its early stages; Lt. Adamson explained that recovering any type of stolen property is often difficult.  Anyone with information on the case is asked to call the Elkhart County Sheriff’s Department at: 574.891.2100