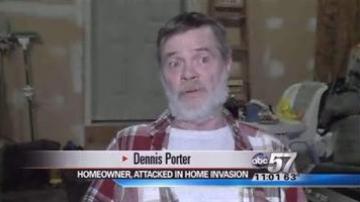 ELKHART, Ind. -- A 63-year-old man was recovering Sunday night after two armed men pushed their way into his home, threatened his life and stole thousands of dollars worth of stuff.

Dennis Porter says he was armed when he opened his door at around 8:30 p.m. on Friday, but the robbers managed to take his gun from him and then bound his wrists together.  They also threatened to shoot him and his dog.

They got away with his cell phone, two flat screen TVs, game systems and $900 in cash.

"Yeah, I am okay, they threatened me and my dog. If they would have shot my dog, I would have went after them," said Porter.

The Elkhart County Sheriff's Department is currently investigating.  Currently they have no suspects, but Porter was able to give them a description.