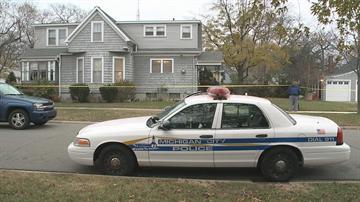 MICHIGAN CITY, Ind. – Gerald Peters, 69, was found murdered in his home on the 300-block of Walker Street just after 11 a.m. on Thursday.

Michigan City Police were called to the house to check on Peters and found him dead in his basement.  Detectives and investigators from the La Porte County Coroner’s Office arrived and set-up a perimeter soon after.

"It's very bad, very bad, Michigan City used to be a nice place to grow, for your children to grow up and stuff like that,” explained Teresa Sanders, who lives across the street.  “But now, no."

Sanders said she didn’t know Gerald Peters well, but that he seemed like a good person.

"I been here for six years, he was here before I was so you know I would so hello to him he's always stayed in his own little area,” she described.  “Very nice, he's a very nice man."

Shortly after the investigation began Michigan City Police asked for the public’s help in finding Ryan Phelps as a person of interest in the case.  He was found later in the afternoon and is being interviewed by police; officers told ABC 57 that a number of other possible suspects are being questioned.  According to neighbor Teresa Sanders, Phelps lived in the same home as Gerald Peters but she didn’t believe he had anything to do with the murder because he spent time with her children.

"Because I know him personally, he used to come over to my house all the time,” she explained.  “So I just don't feel like it could've been him.”

Gerald Peters was a well known businessman, former school teacher and President of the Festival Players Guild at the Mainstreet Theater.

Police are asking anyone with information about the case to call the Michigan City Police Department at 219.874.3221.