7 best places to see Christmas lights in the USA 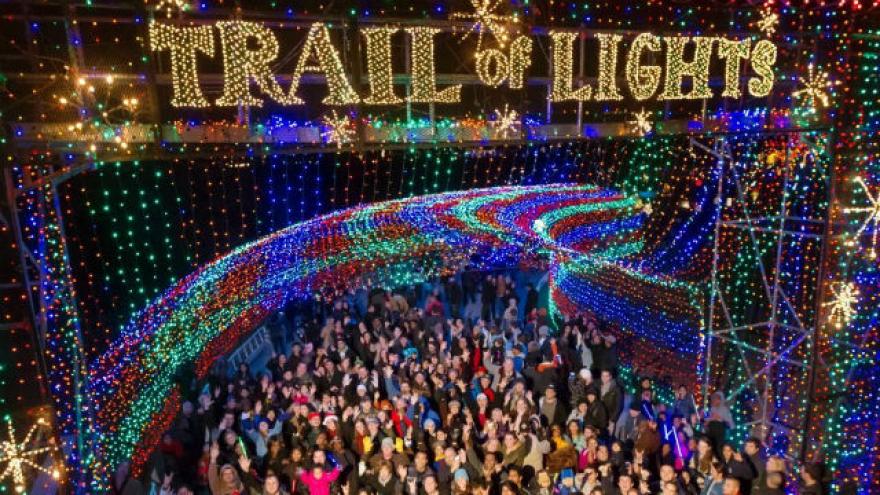 It takes 15,000 hours and 1,500 volunteers to put together the Trail of Lights in Austin, Texas. The 1.25-mile walking circuit features more than 100 lighted trees. Photo courtesy Margaret Licarione

(CNN) -- Christmas in the USA is a combination of traditions from around the world.

Evergreen trees inside homes were popularized in Germany during the 16th century. Decorating with poinsettias? That idea came from Mexico (and the name of the plant came from Joel Roberts Poinsett, the first US minister to Mexico). And 18th-century England helped to change mistletoe's image from a poisonous plant to a poisonous plant that's also a festive kissing trap.

However, there's one favorite tradition with an All-American origin: electric Christmas tree lights.

It started when Edward H. Johnson, a friend and business partner of Thomas Edison, put a string of 80 hand-wired red, white and blue electric lights on a Christmas tree in 1882.

Since the majority of Americans didn't have access to electric power until the 1930s, it took about 50 years for Johnson's creation to become popular.

Since then, it's become an essential part of American Christmas celebrations, whether that means a couple of strings of "tasteful" white lights around the family tree or a pulsating public display synchronized to "Jingle Bell Rock" that can be seen from low orbit.

With a nod to Mr. Johnson's first tree, here are seven of the best destinations in the United States where the electric light tradition continues to shine brightly (check websites for dates and times the displays are open): 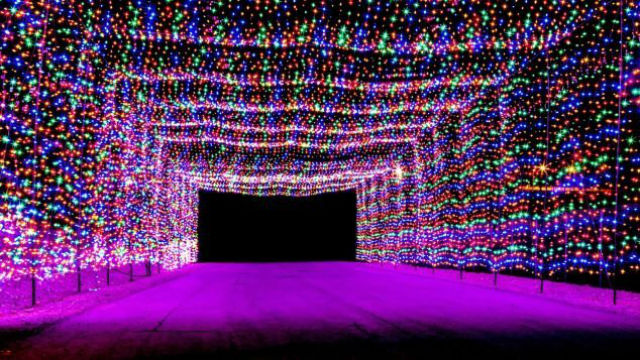 It may seem counterproductive to leave the Las Vegas Strip to look at bright lights, but to find Christmas lights in the Nevada desert, visitors can drive down to the racetrack.

It should be noted that while Glittering Lights is hosted at the speedway, the event doesn't have visitors drive on the superspeedway track, so crash helmets aren't required.

For the upcoming holiday season, up to 30,000 vehicles are expected to make the circuit. 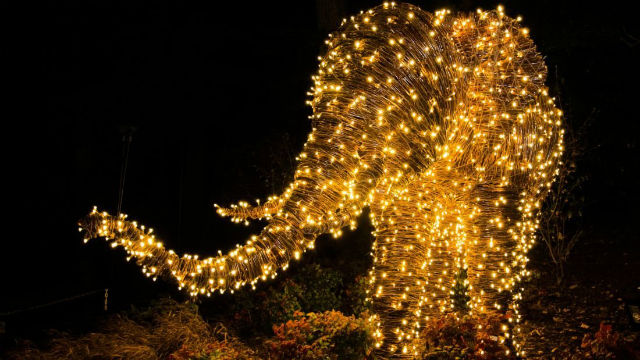 During the holidays, the nation's capitol is home to an unusual event that manages to combine sparkling Christmas light displays with animals that prefer the dark.

At this free event, families can take a spin on the solar-powered Speedwell Conservation Carousel, which features custom-carved figures of 58 species of animals, including a clouded leopard and a sloth bear.

The zoo's Small Mammal House, Great Ape House and Reptile Discovery Center are open, so visitors can warm up and see some of the zoo's nocturnal animals. 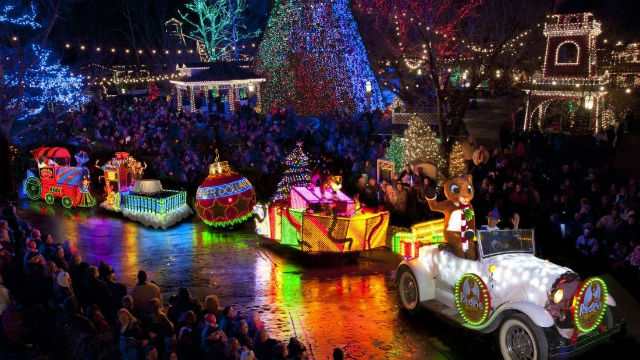 While Branson, Missouri, has grown by leaps and celebrity theaters over the past several decades, Silver Dollar City has been here since 1960.

The theme park is a celebration of Ozark Mountains culture and, for more than two decades, host to An Old Time Christmas festival.

With more than 5 million lights and 1,000 decorated trees, along with nightly parades and two musical productions, An Old Time Christmas is home to the 5-Story Special Effects Christmas Tree that features 350,000 LED lights and, synchronized with Christmas music, can make up to 100 light changes per second. 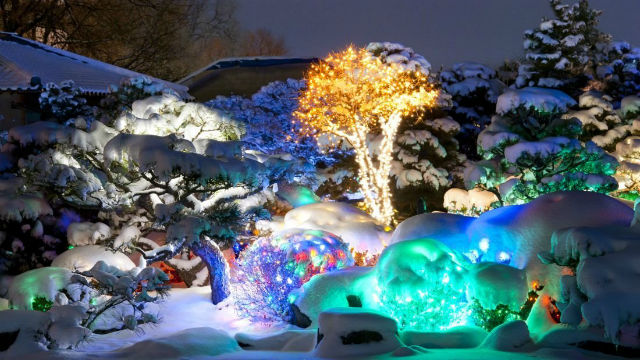 Walking through Denver Botanic Gardens, visitors see thousands of lights on trees and plants. A pair of Holospex turn the lights into 3D candy canes, snowflakes and other shapes. Botanic Gardens

For those who want to see Christmas lights dazzle in a Rocky Mountain setting, there's "Blossoms of Light" at the Denver Botanic Gardens. 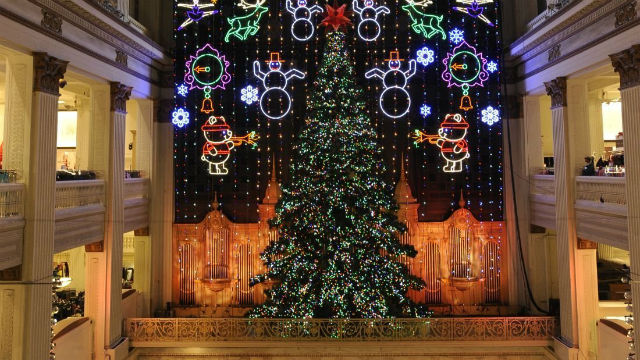 Macy's Christmas Light Show in Philadelphia has a Magic Christmas Tree and 100,000+ LEDs behind a four-story velvet curtain that tell a story with reindeer, toy soldiers and ballerinas. Michael Perez/AP Images for Macy's

Since 1956, parents have brought their children to Philadelphia's Center City to marvel at a department store's resident light display during the holidays.

Macy's (formerly Wanamaker's) Christmas Light Show has a Magic Christmas Tree and more than 100,000 LEDs arranged behind a four-story velvet curtain that tell a story with reindeer, toy soldiers and ballerinas.

At the end of the show, the 287-ton Wanamaker Organ, the largest operational pipe organ in the world, plays "O Tannenbaum."

It takes an estimated 15,000 hours and 1,500 volunteers to put together Austin's Trail of Lights. Located in the Texas capital's Zilker Park, the popular light show has been going on more than 50 years.

The 1.25-mile walking circuit features more than 50 light displays and 100 lighted trees. Standing above it all is the Zilker Tree, at 155 feet it's the tallest man-made free-standing Christmas tree in the world.

This being Austin, you'll also find food trucks and live performances throughout the event. 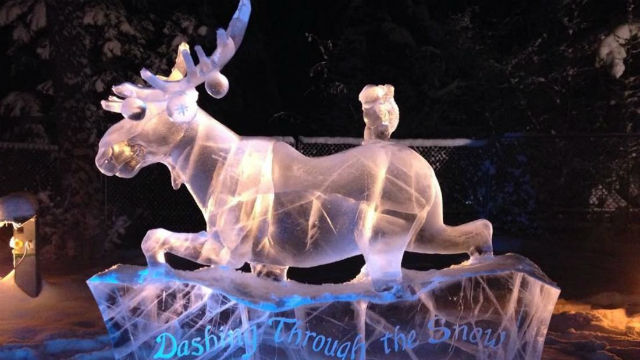 For the past decade, residents of North Pole, Alaska, have hosted the six-week Christmas on Ice festival, combining lights with intricate ice sculptures. Christmas in Ice

North Pole, Alaska's, name comes from an attempt to convince a toy company to move to town.

The toymaker never materialized, but residents of this Fairbanks suburb did embrace the Christmas spirit and for the past decade have hosted the six-week Christmas on Ice festival that combines festive Christmas lights with intricately carved ice sculptures.

And despite the fact that this is Alaska in winter, there are outdoor activities for kids, including ice slides and massive ice bowl "twirlers" where kids can sit and be spun until the colorful lights become a nauseating blur.