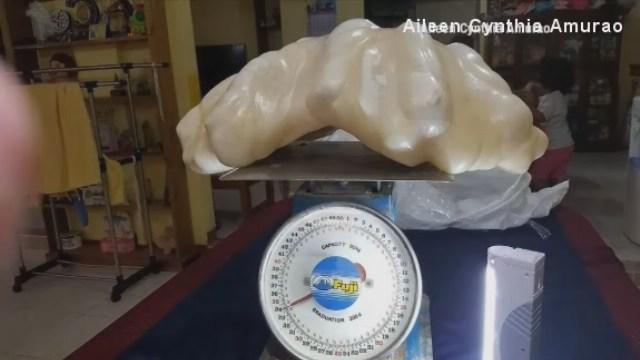 (CNN) -- One of the world's largest and most valuable pearls was left forgotten under a bed for more than 10 years, its owner told CNN.

She said her relatives discovered it and up until now have been using it as a good luck charm.

"He'd almost forgotten everything about the pearl until he was moving out, and he remembered he had something under his bed," she said.

On August 20, Amurao posted photos of the monstrous pearl to Facebook, asking for gemologists who might be able to verify the pearl's weight and value.

"We are not actually (confirming) the pearl is really rare until such a time as it is subjected to a thorough examination," she said.

Until this week, the Pearl of Lao Tzu was the largest known pearl in the world, weighing 6.4 kilograms (14 lbs) and measuring 24 centimeters (over 9 inches) in diameter. It was also found in the Philippines, off the west coast in the Palawan sea.

In comparison, Amurao said the Puerto Princesa pearl came in at a whopping 67 centimeters long (2.2. feet) and is 30 centimeters (1 foot) wide.

"We have decided that the pearl will be used as one of our tourists attractions in the city," she said. "It is already displayed in city hall."

But if you were hoping to go diving and find your own potentially million dollar pearl, you're out of luck -- Amurao isn't saying where it was found.

"We are not divulging the exact area where the pearl was found... we will not release any more information, even about the original owner," she said.