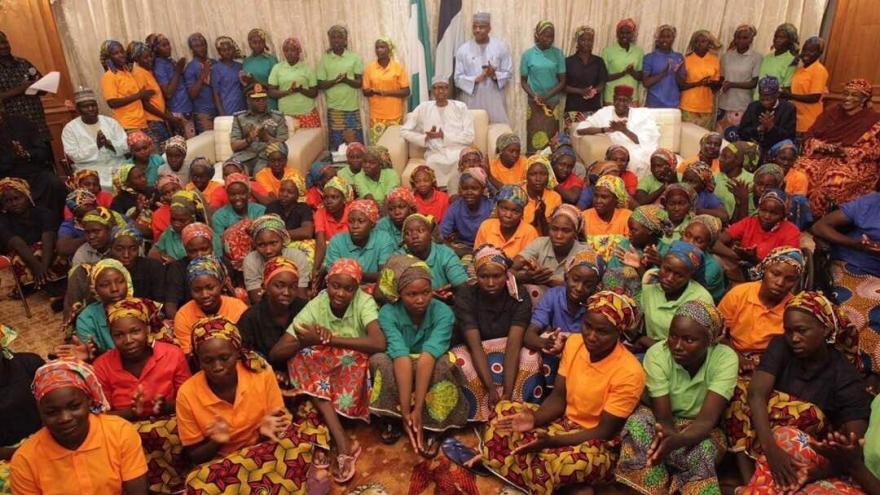 LAGOS, Nigeria (CNN) -- The 82 Chibok schoolgirls who were released after negotiations between terrorist group Boko Haram and the Nigerian government have arrived in the capital city of Abuja, the government said Sunday.

The released girls were received at the airport on behalf of President Muhammadu Buhari by Alhaji Abba Kyari, his chief of staff.

They generally appeared to be in good physical condition. One has a broken arm and another has a leg injury, Nigeria's information minister, Lai Mohammed, told CNN.

More than 100 girls remain in Boko Haram custody and negotiations with the terror group continue, the government said.

Some Boko Haram suspects being held by the government were released as part of the negotiations, Buhari's office said Saturday.

276 girls were kidnapped three years ago

The girls, ages 16 to 18, are believed to be among 276 forced from their beds by Boko Haram militants in the middle of the night in April 2014. The kidnapping from a boarding school in the town of Chibok sparked global outrage and the social media movement #BringBackOurGirls.

"I am very, very excited with this development. I cannot even sleep tonight," said Yana Galang, whose daughter, Rifkatu, was among the girls kidnapped.

Galang said they don't yet know who has been released, "but we're very happy that many have been freed."

"I hope and pray that my daughter is among these released girls," she added.

President to meet with girls

Buhari will meet with the girls in Abuja on Sunday, his office said.

"The President has repeatedly expressed his total commitment towards ensuring the safe return of the #ChibokGirls, and all other Boko Haram captives," Buhari's office said in a statement.

The International Committee of the Red Cross tweeted, "Acting as a neutral intermediary, we @ICRC transported 82 #ChibokGirls to the government of #Nigeria" and included a photo of six Red Cross SUVs on a dirt road.

The Red Cross also tweeted a photo of some of the girls walking onto a helicopter departing Borno State.

"(Given) our long historical independent neutral stance, it's common for us to be the middle man in hostage releases," said Jason Straziuso, spokesman for ICRC for East Africa. "We provide transportation from Boko Haram to the Nigerian government."

"We will continue to meet with the girls and monitor their health," Straziuso said. "Our concern for the girls' well-being will continue in the coming months."

Some had escaped earlier

As many as 57 girls escaped almost immediately after the mass abduction.

The next kidnapped girl wasn't found until May 2016, when she wandered out of a Nigerian forest asking for help, according to witnesses.

Another 21 of the Chibok schoolgirls were handed over to authorities in October 2016. The release was the result of a series of negotiations, the government said at the time.