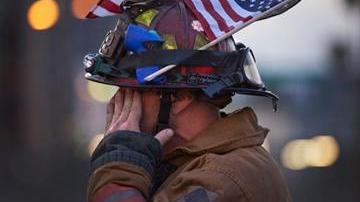 Families, rescue workers and politicians gathered today amid a mix of tears, applause and patriotic cheers of "U-S-A" at 9/11 memorials in New York, Pennsylvania and Virginia.

The 10th anniversary of the 9/11 attacks brought special ceremonies at the World Trade Center, the Pentagon and the field in Shanksville where the planes crashed. After reading a Psalm at the morning ceremony at the World Trade Center, President Obama arrived to applause and chants of "U-S-A, U-S-A" at a wreath-laying ceremony in Shanksville at noon. There, he and first lady Michelle Obama shook hands and spoke with many members of the crowd gathered there.

In Virginia, family members and first responders held a moment of silence with Vice President Joe Biden to honor the time when American Airlines flight 77 crashed into the Pentagon.

Biden said that what took place after the plane struck the Pentagon "was far more remarkable than the damage inflicted in the building behind me" as Pentagon employees and first responders risked their lives to help those trapped by the plane's impact.

In New York, the annual reading of the nearly 3,000 names was punctuated this year by family members' visits to the memorial fountains at the new 9/11 Memorial Plaza, in which the names of those killed are etched in bronze. Some placed a flag or flowers. One woman threw her arms on the name of her loved one, put her head down and sobbed. Many took paper and pencil and making an etching, as one might at a graveyard.

"My big brother, Joseph Michael Ciccone, we love you and miss you," one speaker said. "It's 10 years, but it's still not easy. Your family loves you and misses you."

"She wanted to work for justice but died from injustice," Tanya Garcia said of her 21-year-old sister, Marlyn, a graduate of NYC's John Jay College of Criminal Justice who died while working at Marsh & McLennan Cos., a financial services firm that lost 295 employees and 63 contractors in the attack. "She was a victim of horrendous terrorism."

New York City Mayor Mike Bloomberg opened the ceremony with the first city-wide moment of silence at 8:46 a.m. to commemorate the moment when American Airlines Flight 11 struck the North Tower. Obama then read from Psalm 46, which starts, "God is our refuge and strength."

Among the crowd gathering at the memorial plaza this morning were children too young to have been alive 10 years ago, clutching Teddy bears and wearing dresses with flags sewn into them, family members wearing T-shirts with the words "Never Forget" emblazoned on them, and T-shirts commemorating members of those fire department ladder units and police precincts who perished in the attack.

Mario Montoya came to remember his best friend, Harry Ramos, who worked on the 82nd floor of the North Tower.

"Every year, I come here to feel closer to him," Montoya said.

Police and security presence at the memorial and throughout Lower Manhattan remained significant; police dogs and armed guards were present throughout the ceremony. New York City police commissioner Raymond Kelly told ABC News that there was no new information on a terror plot, but "no reason to lessen our alert status."

After the Shanksville ceremony, Obama will visit the Pentagon. He will also attend a Concert for Hope at the Kennedy Center in D.C. tonight, where he will deliver a 15-minute speech on the attacks.