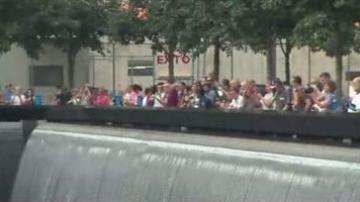 NEW YORK -- The National September 11 Memorial and Museum is expected to be packed for services even though construction still isn't done and the project is behind schedule.

The museum isn't finished yet due to a budget oversight. There's still debate since it would need $60 million every year for operating costs, on top of the $700 million already spent on construction.

The 9/11 Museum in New York was supposed to open to the public Tuesday. Late Monday, those involved came to an unofficial agreement and vowed that construction won't stop until it's finished.

The museum is part of the National September 11 Memorial which has seen four and a half million visitors since it opened last year.

The foundation that organizes the memorial said politicians won't be speaking at the services Tuesday and both President Obama and Mitt Romney have said they would suspend their campaign ads for the day.

Just in time for 9/11, the government announced it will pay to cover 58 types of cancer for first responders who pored through the rubble at the Twin Towers.

Firefighters were exposed to toxins for months and now they're breathing a little easier knowing they'll finally get some help 11 years later.