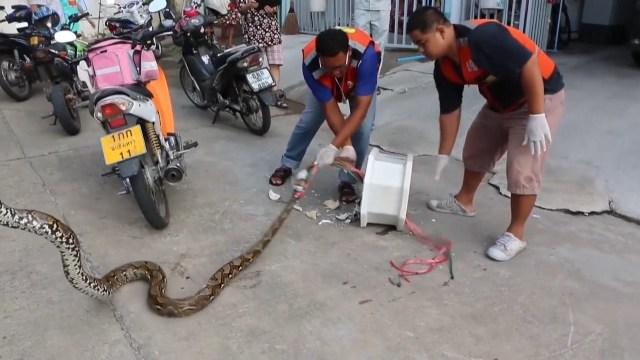 ABC NEWS -- A Thai man is recovering in a hospital after a routine visit to the bathroom ended when he was attacked by a snake.

As Attaporn Boonmakchuay sat on the toilet a nine foot python came up through the plumbing and bit him on the penis, triggering a half-hour tug of war.

His neighbor came to his aid with a rope and a knife but, the victim said, the ordeal only ended when the python momentarily lost strength and the victim managed to open its jaws.

Doctors say the 38-year-old man suffered a cut to his genitals, but should make a full recovery.

Rescue workers removed the snake from the toilet, using hammers to break the piping.

Large snakes are common in Thailand, even in urban areas, especially at the onset of the rainy season when they flee flooded fields for drier ground.