9-Year-old dies after being buried alive on farm 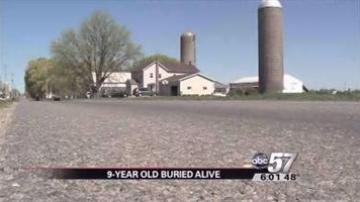 WAKARUSA, Ind. – A Wakarusa boy is dead after what police are calling a farming accident.

According to his grandfather, 9-year-old Kevin Burkholder was playing in a pile of cornmeal in the family's barn when the pile collapsed on top of him.

He was transported to Elkhart General Hospital were he died of asphyxiation.

On Monday, ABC 57 went to Kevin's school, Harrison Christian School and was able to talk to his teacher, Miss Sheri Martin.

Martin said Kevin always had a smile on his face and was always ready to contribute in class.

He was an avid reader and often grabbed a book as soon as he was finished with his work.

In class on Monday, Martin sent her fourth grade class home early from school so the students could grieve the loss of their fellow classmate.

At home, Kevin was more than just his parents little boy. As the eldest son of two deaf parents, Kevin was his parents ears. According to teachers at the school, Kevin looked out for his younger sister and brother.

Neighbors and friends said the Burkholders have had their fair share of struggles, but they find strength in their religion and faith.

Police said Wakarusa and Baugo Township rescue crews rushed to the farm, located on County Road 3, between County Roads 36 and 38 just after 9 p.m., but it was too late.