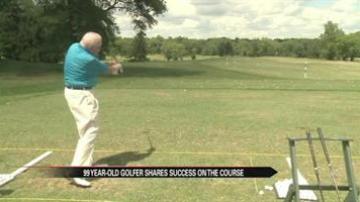 ST. LOUIS, Mo. --- An elderly man in Missouri is living out his golden years on the golf course.

At 99 years old, Jay Straus is rarely seen without a golf club.  Straus has earned four hole in ones and two 67's.

Straus believes his success in life and on the golf course comes down to one simple theory.

"Positive thinking. I see things going on around me, everybody's hollering or crying. It doesn't bother me. I want to think about tomorrow," said Straus.

Three years ago on New Year's Eve he was involved in a serious car accident.  He needed stitches and broke his collar bone, but there was only one thing on his mind.

The first thing he said was "I have to be playing golf by April."