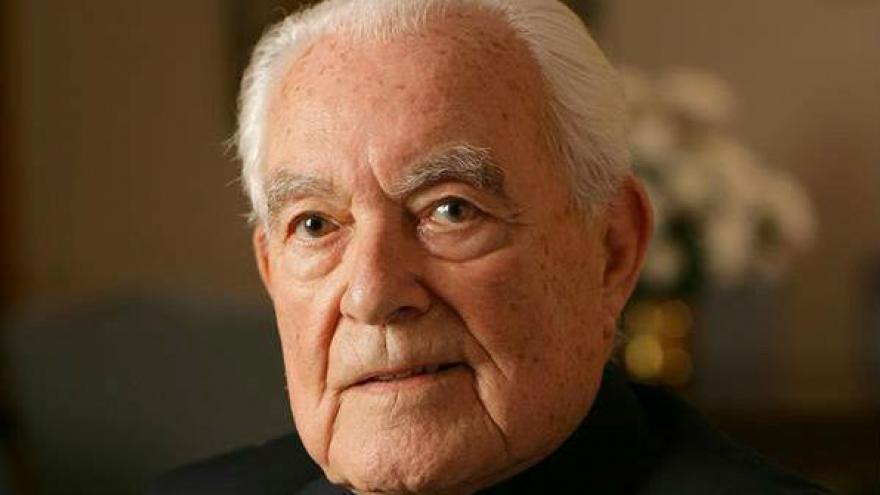 Hesburgh died Thursday night at Holy Cross House adjacent to the University. He was 97.

Hesburgh was a priest of the Congregation of Holy Cross and one of the nation's most influential figures.

This is a day of both personal sadness and celebration of a singular life.  I will sorely miss Father Ted, my friend and mentor of 40 years. His commitment to education and social justice was infectious and I am grateful for having experienced his common touch, his sense of humor, his love of learning and his passion for Notre Dame.

When my father died, Father Hesburgh wrote to me that my dad was now "resting in the loving hands of our savior, bathed in the light of eternal life."  Now too, does our beloved friend.

Rest well, Father Ted.  You showed us what it meant to be a faithful servant and made our country and the world a better place.  Your memory and spirit will live on at Notre Dame and in each of us who had the honor to know and love you.

“Indiana has lost a man of unwavering faith, profound vision and monumental virtue in the passing of Father Theodore Hesburgh. An advocate for human and civil rights, education opportunity, and diplomacy both here and abroad, Father Hesburgh's accomplished life epitomized servant leadership and made a critical impact in advancing and bettering our world. His legacy will endure always and, without doubt, will continue to inspire individuals across the world to pursue a life of peace and justice. The First Lady and I extend our deepest condolences to his family, the University of Notre Dame community, and all who knew and loved this exceptional Hoosier leader.”

The Sisters of St. Francis of Perpetual Adoration released this statement:

Fr. Hesburgh had tremendous influence not only in Catholic higher education but on the national and international scene, influencing Presidents and Church leaders.   He was a man of deep faith and he shared that the most powerful prayer he prayed numerous times a day was, “Come, Holy Spirit.”

“The news of Father Hesburgh's passing is a profound loss not only for our community, but also for the entire country. Today we mourn a great man, a beloved priest, and one of the most influential leaders in higher education. I send my heartfelt condolences to his family and the entire Notre Dame community.”

"Father Hesburgh was a visionary leader and faithful servant. I join with the Notre Dame community in celebrating his incredible life."

The South Bend Cubs have also released a statement.

“Today, along with a grateful nation, we mourn the loss of Reverend Theodore M. Hesburgh C.S.C. Not only did he help shape the world as we know it, he showed us the right way to do it – with moral courage; with respect and dignity for everyone. As a servant of God, an American patriot and world figure, there is simply no doubt that this brilliant, yet humble man, will go down in history as the single-most influential, most admired and most missed individual in South Bend, Indiana history. Godspeed Fr. Ted.”

“Father Ted Hesburgh was an extraordinary leader.  He touched countless lives, including mine, with his intellect, faith, and decency. He will be remembered for his visionary understanding of how to build a world-class university, and also for his great courage in historic moments like the civil rights movement. South Bend will join the University and the country in remembering Father Ted. We will honor his memory by striving always to be and do more than we had thought was possible.”

"The loss of Fr Ted is so sad. A living saint who touched many with hope, faith and direction. He'd challenge you to make a difference. Pray."