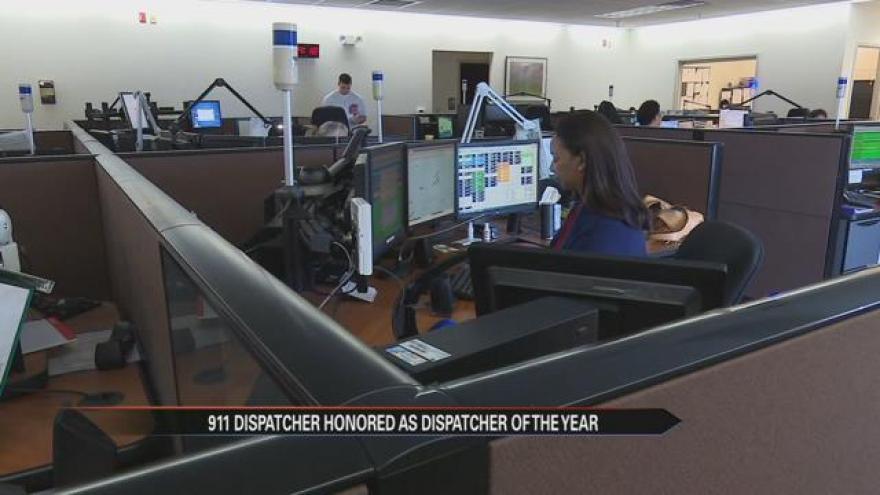 The 2016 Berrien County Dispatcher of the Year was recognized last week for going above and beyond in her handling of a murder-suicide call.

“You try not to take the job home, but certain calls – certain things happen – you can’t help but to take it home,” said Danyeal McGee, the 2016 Berrien County Dispatcher of the Year.

For 14 years, McGee has been answering calls made in times of need.

“Every day is different,” said McGee, whose career has included 10 years at the Berrien County dispatch center and, before that, four years at Benton Harbor’s.

She has received tens of thousands of calls throughout her career in Berrien County.

“We wasn’t [sic] prepared for what was on the other end,” said McGee.

It was a call from inside a Royalton Township home early on that Tuesday morning.

“A little girl on the [other] end [of the call],” said McGee. “And at first, you know, we get a lot of child callers that play on the phone, but this was too early [in the morning]. And when I realized that it was a baby basically on the phone, a kid, that’s saying, ‘I need help,’ that’s when my tone of voice changed.”

The caller was the eldest daughter of Denise Bohn – a local radio and TV personality known for her love of community.

Bohn had just been killed inside her home by her husband, before he took his life.

McGee said Bohn’s young daughter was incredibly composed, following every instruction given to her.

“She was so brave,” said McGee. “She actually helped me because she was so calm.”

The call stuck with McGee.

She decided to collect donations from her colleagues at the dispatch center so she could send Denise’s three children a care package to help them smile.

“That was the goal, just to put a smile on their face,” said McGee, “even for a second.”

“I did what any parent, any person basically, would do for anybody, any child,” said McGee.

This is actually the third time McGee has won this award.

She said this one doesn’t make her happy – because it stemmed from such tragedy – but she’s grateful for the recognition.

She said she hopes this story reminds people that dispatchers are humans who have feelings, too.

McGee also said she hasn’t met Bohn’s children. But she said if they ever want to once they’re older, she’d welcome it.