A City on Fire: Benton Harbor's path to triumph 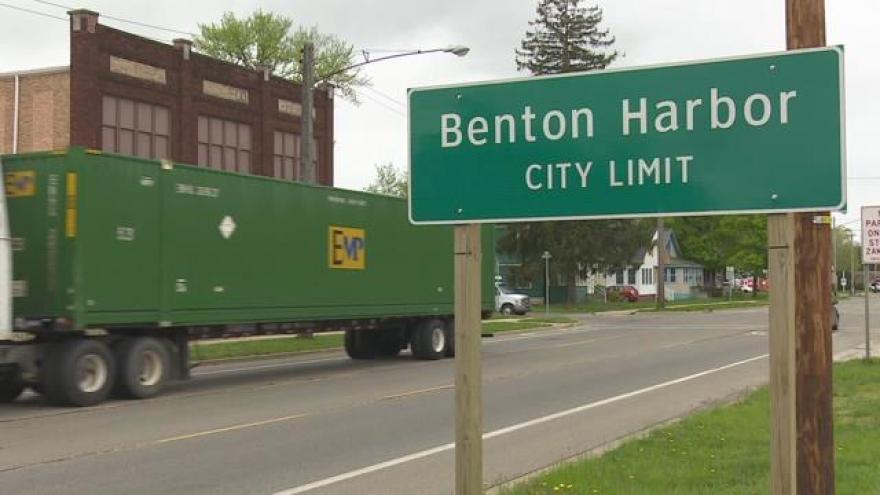 Fourteen years after riots broke out in Benton Harbor; the city is finally coming to terms with the tragedy and continuing to build a path to triumph.

After years of being burned by disparities, lack of access to resources, high unemployment and crime, leaders and community members are determined to turn around the city.

“The untimely death of Terrance Shurn, although it was tragic, I think that when the full story is written, it’ll serve as a moment of triumph for the city of Benton Harbor,” said Benton Harbor Mayor Marcus Muhammad.

A death pushed the city over the edge.

“He was beloved, he grew up in Benton Harbor,” said Mayor Muhammad. “Actually he and I played for the Eagles, on the same basketball team; we went to middle school together.”

Terrance “T-Shirt” Shurn was a known resident in the city, and once-a-friend to the city’s current mayor.

“Circumstances of life sometimes take people down different roads or paths, not because of being a bad person, but by the way of the hand or lack of opportunity you’re dealt,” said Mayor Muhammad.

Opportunity took then-student athlete Marcus Muhammad to DePaul University in Chicago, around the same time his friend’s life would end abruptly while trying to run away from police after a traffic violation stop.

“The community’s response: it was a great injustice, a miscarriage of justice, and felt that the high speed chase was unwarranted,” said Mayor Muhammad.

Community unease turned into unrest and riots eventually broke out along Empire Street.

What led a community to chaos?

Many felt tensions had been building for a while.

A town in turmoil were taunted by years of neglect and lost opportunities.

“When you have lived so long suppressed, it becomes depressed,” said Commissioner Adams. "And, I mean, a person’s heart and mind just has no hope.”

The little hope few residents still had went up in flames with the riots.

“Because they were setting so many fires the fire department had been dispatched to the fires until they figured out there’s nothing you can do about it,” said McGinnis.

McGinnis says the initial night of chaos was unexpected and traumatic.

“I didn’t realize at the time, but I suffered from minor PTSD for probably nine months after the riots,” said McGinnis.

Fourteen years after the riots, Empire street is still not the same.

Buildings that once stood are still empty lots.

Neighbors call the area ground zero, specifically the intersection of Empire and Pavone.

“And there was burnt cars here,” said McGinnis. “They were turning over cars and burning them there.”

Those images of the damage shook the State House.

And sooner than later, the governor stepped in.

“I got a call at six in the morning from Governor Granholm, my office was in Detroit and of course she was in Lansing and she called me a six in the morning, she asked me if I were familiar with the disturbance that had occurred in Benton Harbor,” said Gregory Roberts, Wayne County Senior Executive of the Office of Inter-Governmental and External Affairs. “I said that I was and she says, well I think I need to go down there.”

Roberts connected then-governor Jennifer Granholm to the area while she was just five months into the office.

“It can be an albatross, you’ll have to carry it for the rest of your term,” said Roberts. “[but] she wanted to bring the full weight of the administration to be able to help improve the quality of life.”

Once she touched down in the city, the governor got in touch with Brotherhood of All Nations Church of God in Christ.

“Our goal was to deal with all of the ills of this community, put it on paper and give these recommendations to her and try to get them implemented,” said Bishop James Atterberry.

A lot eyes were on the city in a matter of days, around town and around the country.

“This thing went nationwide like the whole town was on fire and everybody was just rampant, burning and looting, it wasn’t the case,” said Willie Lark, owner of Lark’s BBQ.

Although the unrest was contained to Empire Street, some businesses, even across town, left.

Quite a few have done their share to uplift as well.

One year after the riots, the city’s Arts District started to form.

Glassworks Gallery is one of the many stores thriving in the area that made the most of the once-abandoned spaces.

“This building had a hole and had pancaked down into what is now our glass blowing studio,” said Odden.

They’re now introducing a new culture to the area, and providing opportunities for the future.

They’re seeing growth in the future, in part due to the city’s past.

“Out of those bad things, good things came out of it and I think that was really the beginning of the rebirth of this district and it has a momentum now that it did have before I think,” said Lynne Clayton of Water Street Glassworks.

Is it enough momentum to inspire folks to have hope again?

“It makes me feel like what I’ve been paying forward has not been in vain,” said Commissioner Adams.

Quite a few believe it is.

The hard lessons learned during the riots unearthed solutions to the problem.

And they were recently put to the test.

Shades of that traumatic event were seen in 2016.

“There was a young man who was killed by the Benton Harbor Police Department and it was very touch and go,” said Mayor Muhammad.

The death of Darius “Karate” Wembley last year stirred the community and reopened a wound.

The mayor and other local leaders jumped in front of the problem immediately, equipped with battle- tested lessons learned from over a decade before.

“We tried to really put our arms around the community and connect and provide some understanding,” said the mayor.

Police approached this differently as well.

Benton Harbor Police Department put out information to the public quicker, even sharing body cam footage in order to ensure transparency and rebuild a bridge of trust with residents.

“Where we are now is where we were destined to be, but now it’s are we going to deal with it from a spiritual perspective and a mental perspective of being ready to accept a change that’s coming our way,” said McGinnis.