A daughter's words live on through children's books 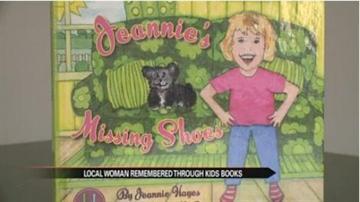 GRANGER, Ind.- After unexpectedly losing their 29-year-old daughter to Leukemia, Phil and Claire Hayes granted her wish to publish her children's book.

The life of local TV reporter Jeannie Hayes was cut short, but she lives on through her children's book.

"It's just a simple message," said Claire Hayes. "I hope that book in somebody's home leaves that message."

The Penn High School graduate and budding local news reporter always loved to write. But her passion and her talent were never fully realized.

"At the funeral, her co-workers from the TV station came and talked to us about how she was the kindest person at the TV station," said Phil.

Now, these Granger parents say their daughter may be gone but her love for writing and her words still live on.

"There was this contest that came up about writing children's stories," said Claire. "So, she submitted two. Another story won, but after her death, a publisher who had the stories from the contest suggested we have them published."

Now "Jeannie's Missing Shoes" and "Shelley the Turtle" two books Jeannie wrote before her death are published in one hard copy.

"It was her dream to publish that book. So, we wanted to do that for her. I think it's a real, kind message and I just really hope it touches people," said Claire.

Inspired by her outgoing personality, young readers will love the bright and cheery illustrations. But no one cherishes the tiny details on these pages more than her parents.

"We still have those socks," said Claire, pointing to a drawing of a pair of socks. "I wear them."

Jeannie lived a life full of love and compassion for others. Through these books, her family hopes that message will never fade and their daughter's story never ends.

"I hope she continues to influence people," said Claire.

If you would like to get a copy of Jeannie's book, it's available on Amazon.com.