A local preview ahead of Tuesday's VP debate 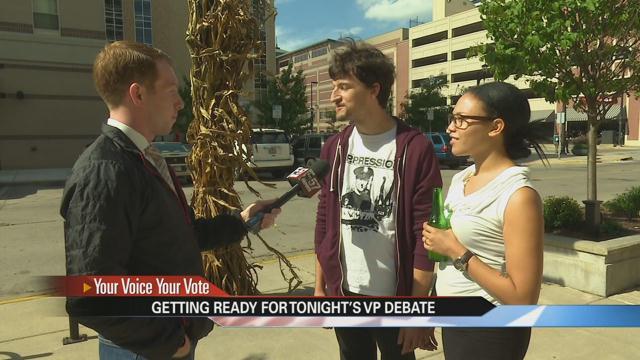 Hours before Indiana Governor Mike Pence and Virginia Senator Tim Kaine were set to debate in the race for vice president Tuesday, a handful of Michiana voters weighed in on whether or not they’d be watching.

“I think people in our area are very interested in this debate,” St. Joe County Republicans Chair Lynn Fitzpatrick said.

Volunteers were hitting the phones and handing out yard signs at the St. Joe County Democratic and Republican headquarters Tuesday afternoon, but in the streets of downtown South Bend, voters were working to remember who’s even running for the second highest office in the land.

Of the same eight people mentioned above, six could not name both vice presidential candidates, while two could.

Governor Pence is widely known across the Hoosier state as the current governor, but Critchlow said that doesn’t necessarily make him popular.

“I don’t think there is much home field advantage here for Mike Pence in this debate,” Critchlow said. “His approval numbers in the state are still extraordinarily low.”

“I think that his support from Hoosiers is probably better than you might’ve expected,” Fitzpatrick said, referring to Governor Pence.

A poll conducted in Indianapolis in April 2016 put Governor Pence’s approval rating at 44 percent; before he accepted the job as Donald Trump’s running mate.

Tuesday’s debate could be the most-watched VP debate in history, but Critchlow and Fitzpatrick said it may only change the minds of certain Michiana voters.

“I think leaning Republicans might be watching this debate much more intensely than probably any other demographic,” Critchlow said.

“I don’t think there’s very many undecided Republicans,” Fitzpatrick said. “I think there probably are still some undecided independents.

When asked if Tuesday’s debate would impact, at all, who they would vote for in November, only one of the eight people interviewed in South Bend said the debate might sway them.