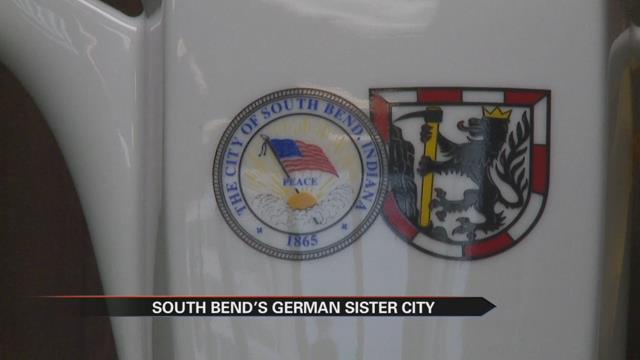 The 14th floor of the County City building was packed Tuesday afternoon for the intertwining of two cultures.

The 21st Century City got in touch with its German roots as 22 delegates from sister city of Arzberg, Germany gathered in Mayor Pete Buttigieg’s office for a welcoming ceremony.

Arzberg is a small town in Germany some may have never heard of before, but they have certainly heard of South Bend.

“20-percent of the population has come here,” says Gabrielle Robinson, a retired IUSB Professor and organizer of the sister city partnership.

Robinson says since the 1850’s fathers and mothers have migrated to South Bend.

Mayor Buttigieg says Arzberg is a community to learn from because of their pride in their manufacturing business.

“Right now, workers at AM General, right in this community are producing cars for Mercedes Benz,” says Mayor Buttigieg. “We need to a little more of that. To take pride in manufacturing and the highly skilled work that our workers bring to the workforce.”

So, as these two different worlds collided under one rood, it’s clear a message of acceptance was well-received.

“I’m so happy if there’s a good relationship between German people and American people,” says Robinson.

If you would like to get involved with the sister city partnership you can contact Gabrielle Robinson here: