A look back at the 1988 Catholics vs Convicts game 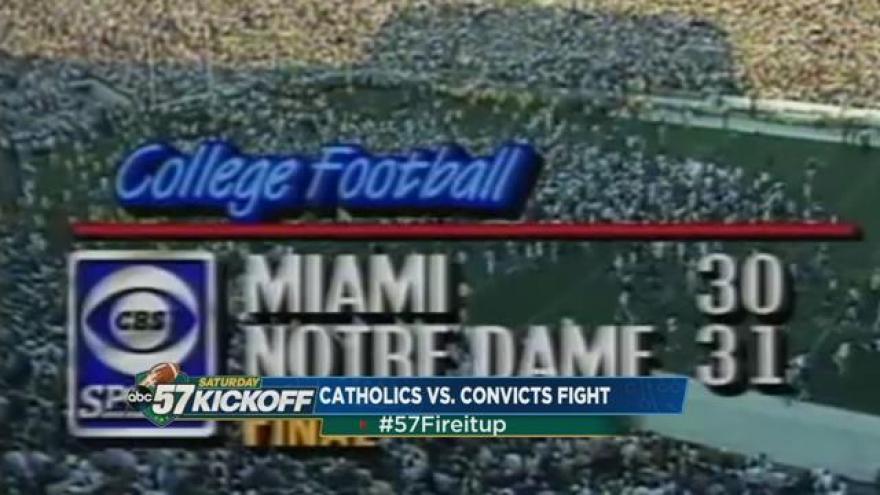 Catholics vs Convicts is a controversial phrase that sparks a variety of emotions for both Notre Dame and Miami fans alike. We take a look back at the classic battle that began before the classic 1988 game even started.

"I truly believe it was the right place, right time, and era," said Bill Bilinski, Sports Editor at the South Bend Tribune.

It was the perfect storm under the Golden Dome. Number-one undefeated Miami against number-4 undefeated Notre Dame

"It was electric in the city," Bilinski said.

South Bend was the center of the college football universe on October 15th, 1988.

"You've got to remember, 36 game winning streak for Miami," Bilinski said. "The intimidation that supposedly they tried to portray when they were taking the field. And then you had Notre Dame, the upstart really. They had all this background and history and Miami just ignored all of that."

"Yeah, looking back over the years, they had the reputation as the bad boys. They were great players, great program and they were exciting for college football but we were pretty bad ourselves," Notre Dame former Notre Dame captain Ned Bolcar said.

A heavyweight bout for the ages.

"It was almost like two boxers going into a ring and instead of doing this, they're shoving each other," Bilinski said.

But the two teams didn't wait for the bell to ring.

"I just remember whatever story you're gonna hear them tell, I know we were in the endzone and they came out of the tunnel and pushed us on the field and we turned around and pushed them back," Bolcar said.

Bilinski had front row seats to the prize fight.

If you ask him who threw the first punch, he still can't tell you.

"But it served as a catalyst for us in the locker room, that we were extremely motivated to go back out there and kick their butts. And coach Holtz basically said, leave the butt kickin' on the field, between the whistle and at the end of the game, Leave Jimmy Johnson's ass for me which he did say," Bolcar said. "It was just a great game."