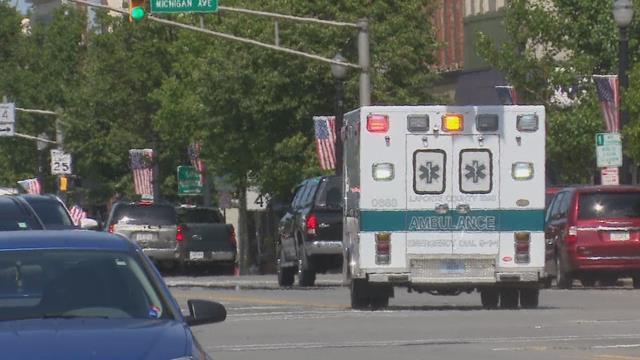 A father faces child neglect charges after being dropped off near La Porte Hospital with his 14-month-old daughter while he was overdosing.

On Monday night employees at La Porte Hospital called law enforcement after seeing a woman and man in a black SUV drop off 28-year-old Michael Urdow and his daughter near the hospital entrance.

“He had no idea how he got there and didn’t seem like he was too concerned where his child was at the time when I had spoke to him,” says Deputy Jon Samuelson of the La Porte County Sheriff’s Office.

After being revived with six doses of Narcan, Urdow told Deputy Samuelson he took Xanax in the morning, blacked out, and may have taken heroin.

“This affects an innocent child and I take it to heart that’s a case that I’m not a fan of going to work but it’s a case I also take very seriously,” says Deputy Samuelson.

Samuelson says the child showed no signs of abuse but Child Protective Services was called and the baby was placed in the care of her grandmother.

Urdow faces child neglect charges and the case will be taken to a judge.

The courts mandate that children involved in Child In Need of Services cases be appointed a representative.

“We are a social service agency that primarily works with children and families that are involved in the court system,” says Karen Biernacki the CEO of Family Advocates.

Biernacki says family advocates will most likely take on the 14-month-old’s case and they have seen many other similar cases.

“We’ve seen an increase in the number of cases that we get involved in because of substance abuse primarily opiate use, heroin,” says Biernacki.

Biernacki says these cases have been on the rise since 2014. They currently have 195 children they are working with and 90 percent of them have been removed from the parent’s care because of drug problems.

“Most of them need to detox before they can even go into in patient and there aren’t very many services available to for people to detox,” says Biernacki.

Biernacki  says it’s heart breaking to see how drug use affects more than just the user.

“There is such a huge gama of needs when you are looking at the effects of substance abuse and community and really the victims and the really vulnerable victims are the children,” says Biernacki .

In a month Family Advocate can be assigned as many as 30 new children.

With that amount of cases Biernacki says there are just not enough volunteers to keep up with the work.