A Michigan man threatened to jump off an overpass, big rigs parked underneath to break his fall 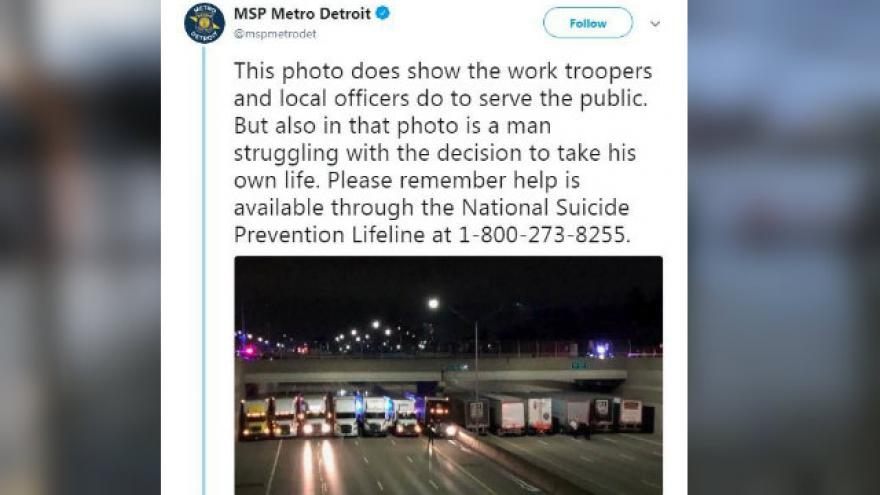 A man stood on a freeway overpass near Detroit early Thursday, threatening to jump. So thirteen tractor-trailers lined up underneath, ready to break his fall. Photo courtesy @mspmetrodet/Twitter

(CNN) -- A man stood on a freeway overpass near Detroit early Thursday, threatening to jump. So 13 tractor-trailers lined up underneath, ready to break his fall.

Troopers closed off both directions of Interstate 696 and asked for the truckers' help, hoping to protect the man in case he fell or jumped, said Lt. Mike Shaw of the Michigan State Police.

Asking truckers to help in such cases is not unusual, Shaw said, but "most of the time these events are (resolved) pretty fast, so we only get one semi."

This time it took about three hours to get the man, whom police declined to identify, down from the bridge, he said.

It was 911 calls that alerted police to the man around 1 a.m. Tuesday on the overpass in Huntington Woods, just outside Detroit, Shaw said.

"Once we figured out that this is a situation where someone might be contemplating taking their whole life ... we shut traffic down (and) we diverted it off onto the side streets," Shaw said.

Troopers looked for big rigs exiting the highway and asked them to drive ahead instead and park beneath the overpass. The 13 trucks packed in tightly to minimize the gaps between them.

Should the man have fallen, Shaw said, it would have been only five or six feet onto the roof of a truck, rather than 14 feet to the concrete below.

Police ended up talking the man down, he said.

"Usually when we talk to people that are involved in these type of incidents," Shaw said, "usually there's a trigger. We try to find out what that trigger is and rectify it."

A picture of the scene, showing the 13 trucks parked in both directions beneath the bridge, gained a lot of attention on social media Tuesday. But Shaw said it doesn't tell the real story.

"In that picture somewhere is somebody that was contemplating ending their own life," he said. "We want that to be the story -- not what Michigan State Police did or what the truckers did, but that the person changed their own mind."

Shaw urged anyone struggling with such decisions to seek help from the National Suicide Prevention Lifeline, their loved ones, clergy or 911.