A new van for Bekka 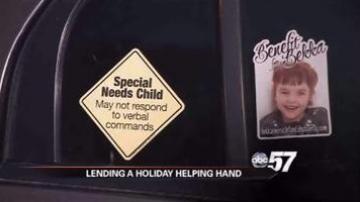 ROSELAND, Ind. -- Teens often wish for a new car for Christmas, but one special 8-year-old is in need of a new van to help her get around.

Her family is holding an event at Cheers in Roseland to help raise money to buy that van.

"Appreciate the small things the seconds the minutes the hours the days everyday is truly a gift." Melissa Sallee said every moment with her daughter, Bekka Sallee, is a blessing.

She has Spastic Cerebral Palsy which means that her muscles spasm uncontrollably.

Her parents said that through it all, she smiles.

"I'll be at my breaking point and I'll just break down and cry" Melissa said, "I kind of loose faith and courage and hope and she knows how to cheer me up."

Bekka doesn't get out much because she grew out of her old wheelchair and her new chair is too large to fit in the family car.

Aside from the countless doctor's appointments Bekka needs to get to, the Sallees said she misses out on things that many take for granted.

They said they just want to "give her the freedom like normal kids to beg you for a toy at the store, it's the small things."

Melissa had to quit her job because Bekkah needed to be watched 24 hours a day.

And Steve Sallee just went back to work, after being laid-off from AM General.

With just one income, the Sallees said they are relying on the event on Dec. 14 to raise enough money to buy the wheelchair accessible van that Bekka needs.

"She's a fighter that's what she teaches you, that no matter what she goes through the pain, all the surgeries that she's been through. She has strength that I've never seen in anybody before."