A super-powered kickoff; Mishawaka Relay For Life off to a big start 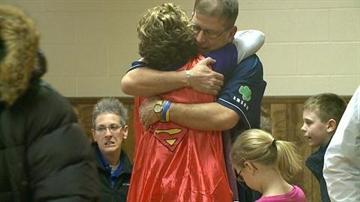 MISHAWAKA, Ind. – Through tears and cheers, supporters of cancer research alongside survivors, their families and friends, kicked off the 2012 Relay for Life campaign in Mishawaka, Wednesday night.

This year a record 44 teams had already signed up to participate in the event, by Wednesday afternoon.

That is double the number of committed teams from the same time in 2011.

By the end of the evening four additional teams had signed up, bringing the total to 48.

Patti Reinhardt is in charge of organizing the Mishawaka teams and explained how there is never a shortage of people interested in helping raise money to fight cancer. “Relay is the spirit of hope and that’s what it gives everybody, because they feel like they are doing something,” said Reinhardt.

She remembers when the doctor told the single mother of four young children the bad news. “I was told that if the cancer did not kill me that there was a possibility that the treatment would,” said Dubree.

She did survive both, though and is almost to the point of being able to say her cancer is in remission.

The whole ordeal altered her perspective. “Now that the shoe is on the other foot, and I am the patient rather than the caregiver, and the funding can help somebody that’s been in my shoes, it’s absolutely life changing. Without organizations like this, it would far more difficult to find a cure,” said Dubree.

The Mishawaka Relay for Life is scheduled for the third week of May. They still have plenty of spots open for people interested in starting a team.