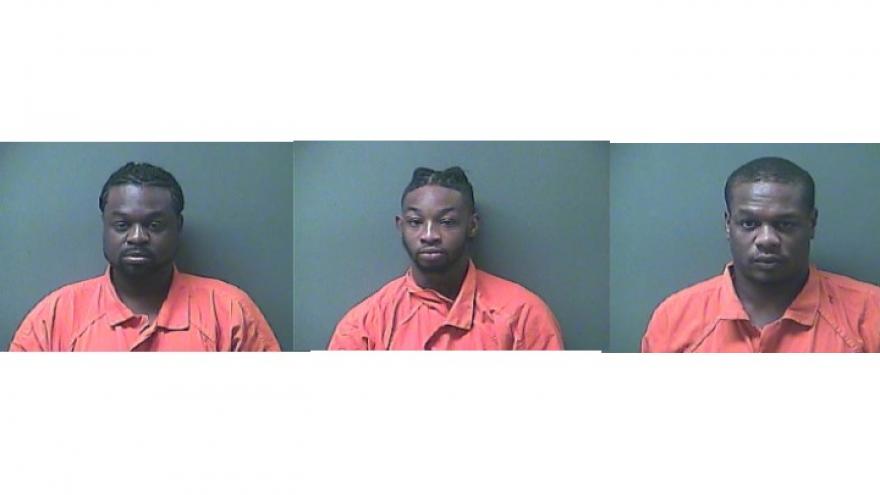 LAPORTE COUNTY, Ind. -- A traffic stop along US 20 ends in three felony arrests and the seizure of guns and drugs at 8:37 p.m. on Friday, December 4.

Deputy Jon Samuelson observed a car following a trailer too closely, as well as the vehicle crossing over the fog line and abruptly swerving back into the driving lane.

According to officials, a traffic stop was initiated on the 4000 block of US 20.

As the traffic stop progressed, Deputy Tyler Oberholtzer arrived to assist. Due to circumstances within the passenger compartment, a search of the vehicle was commenced according to officials.

According to officials, a loaded 9 mm handgun, a loaded .40 caliber handgun, and a large quantity of drugs were all located during the search.

Mitchell, Herron, and Durham were all transported to the LaPorte County Jail.

Mitchell was arrested for dealing in a Narcotic Drug, a level two felony.

Herron was arrested for dealing in a Narcotic Drug, a level two felony. He is also being arrested for serious violent felon in possession of a firearm, a level four felony.

Durham was arrested for Dealing in a Narcotic Drug, a level two felony. He was also arrested for carrying a handgun without a permit, prior conviction, a level five felony.

According to officials all three men remain housed at the LaPorte County Jail and each are being held on a $50,005 cash-only bonds.

“The seizure of these firearms and drugs are the result of proactive and aggressive traffic enforcement. Deputies will continue to seek out and remove illegally possessed firearms and drugs that are destined for communities throughout LaPorte County,” Captain Derek J. Allen said.

Arrests and criminal charges are mere accusations. Every person is presumed innocent unless and until proven guilty in the court of law.