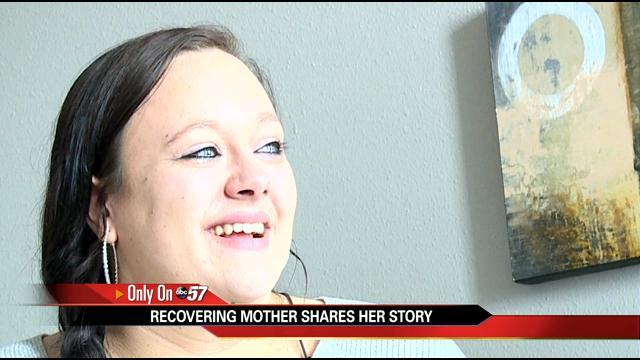 SOUTH BEND, Ind. -- In December, 21-year old mother of two Rachel Stevens was found asleep behind the wheel of a car with stolen plates at a gas station in Kosciusko County. When officers searched her vehicle, they uncovered meth, marijuana and heroin.

All the while, her 9-month old daughter, Alexandrya, was hours away in Fort Wayne. Police say it took them over 17 hours to recover the little girl and place her in the care of DCS.

"At that point in time, I did what I thought was right and I don't care who tells me I'm a bad mother because I'm not,” said Stevens. “I don't regret it happening, I don't regret anything that has happened. I regret the people that I've hurt through it, but I had to take it as a learning experience.
Everything happens for reason, I had to hit complete rock-bottom to start coming back up."

What was it like to see her daughter for the first time since her arrest?

"For her (Alexandrya) to look up at me and say ‘Mama,' it was like the best feeling,” said Stevens. “I get to see her once a week for four hours through supervised visitations. It's what I need right now, it's not necessarily what I like because I want my baby home with me, but I'm not ready because I'm still trying to fix me."

Stevens says she's trying to mend herself after years of abusing meth, something she says she gave up at the turn of 2015.

"I just want to do something so much better now,” said Stevens. “I want to focus not only on myself and my kids, but also helping somebody else. That's my big thing, if I can help one person out of all of this, then I did something with myself."

Stevens says she's already in talks with Hope Ministries in South Bend about speaking to young women regarding the life-altering effects of drug abuse.

Stevens is due back in court Thursday morning in Kosciusko County.